Lizard Princess[1] (or Reptile Princess) is a character who makes a cameo in the Season 1 episode "What is Life?" in Ice King's Imagination Zone. She is located between Space Angel Princess and Mini Queen. She later reappears in the Season 6 episode "Breezy." She is the ruler of the Lizard Kingdom. 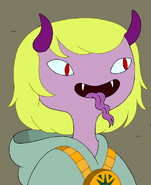 Retrieved from "https://adventuretime.fandom.com/wiki/Lizard_Princess?oldid=814866"
Community content is available under CC-BY-SA unless otherwise noted.