"Little Brother" is the eleventh episode in the sixth season of Adventure Time. It is the one hundred and sixty-seventh episode overall.

Shelby accidentally gains a new brother, who he inspires to become a great hero.

The episode begins with the night view of tree fort. The view goes inside the tree fort, and Jake is seen to be starting a metronome. He starts this and follows its oscillation to play his viola perfectly. As soon as he starts to play, someone is heard shouting inside his viola which startles him. As he sees inside, there seems to be a bug party going inside his viola, and it's also seen that Shelby is hosting it. Everyone is having fun, and Shelby asks a Dancing Bug to "shake it." At first he was starting to disagree, but then he agrees and starts to dance, which makes everyone awe-struck. Everyone gathers round the bug, and a scorpion starts to compliment it by saying it was the best bug in this party. This makes Shelby jealous, and he says he can do it. The scorpion asks what will he do, to which he replies he will do parkour. He performs his parkour by jumping on a pole, then on the roof, but he is pulled down because he could not hold for long. When he fell, he says that he is quite hurt, and finds that his lower part of body is severed by a string in mid-air when he fell.

Shelby falls unconscious and the scene changes to him waking after a long time. He is astonished as his lower part starts to move. Shelby asks who he is, to which the creature could only blow a rasp. Shelby finds a note in his lap, which explains that the severing of his lower part meant that he has a new brother now, and his name was decided to be Butty Butterson. But Shelby says that he will call his brother Kent for short.

Outside the viola, Jake is seen to be sleeping soundly, and Shelby calls out to him. He wakes up and is confused to see Shelby's severed butt. Shelby explains that since his lower part got severed he now has a little brother whom he will call Kent. Then Kent speaks his first words, "I'm Kent," and this startles Shelby. Jake is surprised that he could chop off a worm to get two, saying he thought it was a myth. Shelby says myth is his power. He then asks Jake how to raise a brother. Jake says to give him something sharp to fight off bad guys and says sometimes he might also have to help, referring to his and Finn's adventures. Shelby agrees and starts to go. Kent starts to leave, but before he goes, he tells Jake that someday, Jake will be his food.

After this Shelby offers Kent a sword, and Kent is happy with it. He sprouts two arms and picks the sword. This surprises Shelby, who asks how he did it, to which Kent says he does not know. Shelby then explains that since he is the little brother, he should fight off bad guys... or girls. After this he sends him away. This time, Kent sprouts legs and runs away. Shelby tries to sprout legs like him but cannot. Kent is then seen to be walking beneath the tree fort and as he walks, he comes across a rat wearing a crown who is chewing off the root of the tree fort. He starts to go after the rat with his sword, because he was a bad guy, and startles the rat. The rat runs away in a nearby hole and Kent follows it. Kent says it to get back and but it runs away into dark. Kent is suddenly confronted by some pair of white eyes, and a big pair of red eyes, which flashes and the scene changes.

Kent is bruised and sleeping in a bed. A Dewdrop creature greets him when he regains consciousness. Kent is startled and asks who he is, but it only laughs. Kent asks where he is, and another creature comes in. The new one is happy and offers him a dewdrop do drink, which makes Kent free from his bruises. The one who healed Kent introduces itself as Leaf Beard. He then explains that the Rat King has made near the roots of the tree, at which they currently reside. He asks him to be careful. Kent is confused and says that he doesn't know what or who a Rat King is. Leaf Beard then comes to the conclusion that Kent is not from the roots of the tree fort. Leaf Beard tells that Rat King is the one who is destroying their habitat, which is the tree's roots. Kent comes to conclusion that the Rat King is bad. He asks for his sword, but Leaf Beard says it was broken to shards when they found him. He asks Leaf Beard where he can find a new sword, and the creature who greeted Kent first introduced herself as the blacksmith, and only some certain ingredients are needed for a new sword. She sends Kent to bring these.

The first ingredient is to find an unbreakable ore. She tells Kent to follow the sound of the singing crystal to find it. Kent is going on his journey and when he reaches a mouse inside a emerald-type force field, who greets him. Kent asks for the unbreakable ore. The mouse instead offers him a lot of emeralds, and that he could be rich with it for life, but Kent refuses, and says that he's good. The mouse is impressed, telling that wealth cannot tempt him so he gives him the ore, which turns out to be a bottle cap. He continues with his journey, when suddenly a sword almost hits him.

The third item is the sacred flame. He continues and is greeted by a ninja mouse. He tells him to consider drinking some sap, which he produces from breaking a wall nearby, which will make him immortal. Kent refuses and says that he was born earlier that day and thus doesn't have a sense of mortality. The ninja then offers him the sacred flame, which is a firefly. With these, Kent returns, and the blacksmith makes him a perfect sword. He happily leaves, but on his way out, he spies the Rat King. He chases it to its lair. The Rat King then speaks to him, asking why he is here. Kent replies he is here to fight him. He goes through the body of his enemy, which turns out to be a body made of many rats. The Rat King says that he should join him and he will become a king, and live like a god. Kent refuses and goes to kill it by getting near its head.

He then takes his sword and severs the teeth of the rat. The scene changes to Shelby watching Finn and Jake being happy. Shelby starts to sing about his brother. By and by, Kent's voice comes and they both start to sing at same time. After this, Shelby and Kent become happy, but then Shelby writes about how his brother, due to his ingestion of the dewdrop of the underworld, needs to return there. Maybe he was going for the offers the mice made, but he just knew that due to the break of the Rat King's curse, the willow tree will bloom for the first time. The scene changes to the willow tree, which is bloomed with pink blossoms and the episode ends. 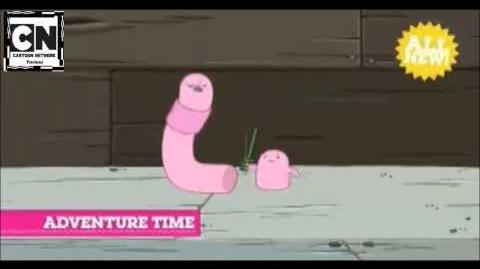 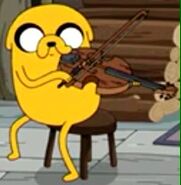 Add a photo to this gallery
Retrieved from "https://adventuretime.fandom.com/wiki/Little_Brother?oldid=833630"
Community content is available under CC-BY-SA unless otherwise noted.