Tom Kenny
Lisby the Cashew Butler is a character who appears in the episode "Henchman." He is the Duke of Nuts' butler.

Lisby the Cashew Butler is a cashew who wears a green suit and an orange bow tie. He wears a party hat at Peanut Baby's birthday party. He is very happy and joyful. 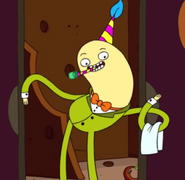