Jeremy Shada
Cole Sanchez
Steve Little
Life Given Objects are objects or plants that were given humanoid life by Ancient Sleeping Magi of Life Giving. They make their debut in "Mystery Dungeon," where Ice King's Fionna and Cake Omnibus was brought to life in hopes of the actual characters coming to life.

They next appear in the episode: "Little Dude," where Little Dude, Finn's hat, was accidentally brought to life, and began causing havoc. The Sleeping Magi eventually figured out that his feelings control his creations, and he began creating life out of objects around the Candy Kingdom, because Little Dude had possessed a Gumball Guardian and began destroying the kingdom.

In "Thanks for the Crabapples, Giuseppe!," the Magi brings Bus Person to life in attempt to keep the bus from sinking. Unfortunately, this proved to be futile, as Bus Person could not swim.

Their next appearence was in the episode, "Friends Forever", where Ice King made the Sleeping Magi bring all of his household objects to life so that he could be friends with them. Unfortunately, that didn’t end up working out for him so well.

Their latest appearance was in "Diamonds and Lemons," when the Magi brought a block of TNT to life.

The Life Given Objects all appear to be the object that was brought to life with a face, and sometimes arms/legs.

Surprisingly, these characters go through development throughout the episodes they appear in. In their first debut the Fionna and Cake book was a mindless idiot who lagged and danced, it didn’t seem to appear to have any real personal traits. In their next episode, they developed emotion and began to actually speak real words. In their latest episode, they had real character, personality, and a good grasp on speech.

Other Life Given Objects 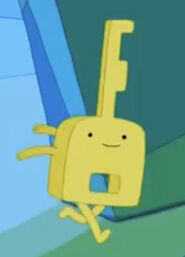