"All the Little People" (As a Toy)

Lenny makes his first appearance in "Trouble in Lumpy Space." He hangs out with Glasses and Monty on Makeout Point. According to Monty, they were all ditched there when someone drove away without them. He is one of two Lumpy Space People whose "smooth" side has been shown (the other is Monty).

Lenny pushes his friend Monty off the lumps antidote as soon as his turn is over, but nobody complains so it is likely the three have agreed on how long each other's turns are. He offers information about the antidote to Finn easily, and even also allows Finn to borrow the antidote as long as he will "give it right back." He does however take it back when Lumpy Space Princess insults him and his friends, so the group may not like Lumpy Space Princess. He seems to be a generally nice guy.

Lenny is the most bulbous of the three Lumpy Space People at Makeout Point. He is taller and fatter than the other two, causing his body to have fewer small folds. His skin is teal colored except his face, which is a light blue. He has what seems to be acne on his face and bigger bumps on his back.

As a smooth person, he is significantly more humanoid and has green skin. He becomes skinny and relatively normal proportioned with the exception that his head is huge. He has many accessories that apparently are not available when he is lumpy including a blue and white baseball cap and a red kerchief. He also wears a light blue shirt and black shoes. When he was first seen transforming into a smooth person he turns his hat backward. 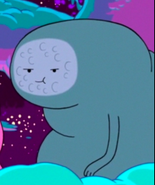 Add a photo to this gallery
Retrieved from "https://adventuretime.fandom.com/wiki/Lenny?oldid=797740"
Community content is available under CC-BY-SA unless otherwise noted.