"Lemonhope Part 1" is the fiftieth episode in the fifth season of Adventure Time. It's the one hundred and fifty-fourth episode overall.

Tired of Princess Bubblegum lecturing him about his responsibility to save the Lemon People, Lemonhope yearns for freedom, and sets off out into the world to be a free lemon.

The episode starts off with Lemonhope having a dream in which he has wings and is flying through a dark landscape, and there are several doors. He hears knocking on one but cannot seem to open it. He is soon woken up and comes inside to continue a sort of school run by Princess Bubblegum. There, he watches a video about Lemongrab saying that the Lemon kingdom is doing just fine, despite obvious issues in the video, the most obvious being him enslaving the kingdom's residents. He then strongly advises Princess Bubblegum not to go there again. Princess Bubblegum then unsuccessfully tries to convince Lemonhope to go back to the kingdom and save the lemon people from Lemongrab's cruelty by presenting him with two cupcakes, and convincing him to see why he should give one to Finn.

Princess Bubblegum decides to visit the perimeter of Castle Lemongrab, which is heavily defended, with Lemonhope. As Princess Bubblegum and Lemonhope cloak themselves to prevent being spotted by Lemongrab, she tries to explain that Lemonhope should help and free his people. A lemon person tries to escape the castle walls, but fails as he is spotted and grabbed by a flying guard and taken to Lemongrab and eaten. Lemonhope decides to run away into the forest because he wants to be free.

Lemonhope, after traveling through the forest for a while, visits a flaming village. He sees a great sand ship leaving the dock and attempts to catch up to it by following it and climbing up a loose rope. He finds a lime on the ship, which he begins to suck on, and uses his harp, which appears to have luring powers, to make rats form a blanket on him. While he's sleeping, the ship crashes and he is knocked out by falling items. While he is knocked out, the crew of the ship presumably evacuate. He then has a dream about Lemongrab 2 having fallen off a horse that is Lemonhope, who is ignoring him. Lemonhope steps on a drop of gum, which is Princess Bubblegum in his dream. She talks to him, as he attempts to get her off his hoof. At the end of the dream, she screams "Unacceptable!" in a manner similar to the same phrase by Lemongrab. He wakes up, perhaps weeks later, to find the ship in ruins, aground in a hot desert.

By this time, he becomes very thirsty, claiming he has run out of juice. He leaves the ship, making remarks on the freedom of the things around him, such as that the cloud above him has the freedom not to rain on him, and he is not annoyed at that. After wandering for many hours, he eventually catches on fire and falls unconscious, while hoarsely whispering "Freedom." 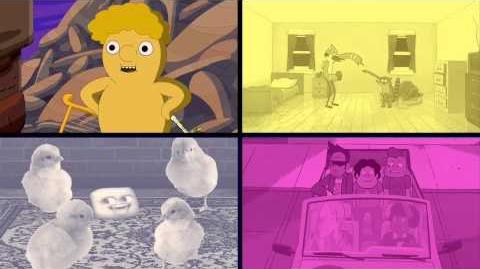 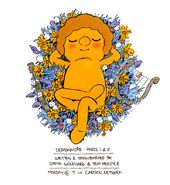 So this is what has become of Earl Lemongrab. Disgusting.

Dehydrated, hair on fire... such is the price to pay for freedom.
Español Français
Community content is available under CC-BY-SA unless otherwise noted.
Advertisement