Justin Roiland
"Lemonhope," also known as "Badlemonnohope" is a Lemon Child who was formerly imprisoned in Castle Lemongrab. Lemonhope first appears in "Too Old," where he escapes from the Earl of Lemongrab with the help of Princess Bubblegum, Finn, and the Lemon People. He eventually returns to the castle to free his people from their oppressive ruler, but departs soon afterward, seeking to live his life in freedom.

Lemonhope is a small and plump Lemon Child with curly yellow hair and large round eyes. When he was first found in the bathrooms of Castle Lemongrab, Lemonhope wore a tattered, white shirt and a shock collar. After his rescue, Lemonhope was given a clean and simple outfit by Princess Bubblegum. However, he later abandons it and chooses to live in the nude.

Many years into the future (presumably, at least one thousand - "I'll be back when I'm tired of being free. See ya in a thousand years, I guess.") Lemonhope appears as an elderly Lemon Person and his hair has been made into long braids or dreadlocks. He has a round fluid container strapped to his chest and maintains a pink holographic armor around his body.

Lemonhope was likely created by the Earl and his twin after they received the candy life formula from Princess Bubblegum. Lemonhope was treated poorly by the Earl, even when compared to the other residents of the castle. This was likely because of his talent with the harp as its sound was unpleasant and potentially deadly for the Earl. In an attempt to block out Lemonhope's music, the Earl of Lemongrab imprisoned the child inside of a washroom in Castle Lemongrab.

In "Too Old," Lemonhope is discovered by Princess Bubblegum and Finn during their visit to the Lemongrab Earldom. The Princess asks Lemongrab if Lemonhope can be brought back to the Candy Kingdom and be enrolled in a school for gifted children. However, the Earl refuses and imprisons Lemonhope in the castle dungeons. After Princess Bubblegum concludes that there is nothing in the Candy Kingdom-Lemon Earldom treaty that will free Lemonhope, she and Finn decide to pull a prank on the Earl, ultimately resulting in their arrest. In the dungeon, the Princess gets Lemonhope to play Finn's flute and manages to attract both Lemongrabs. Entranced by the noise, Lemongrab 2 releases the prisoners, earning the wrath of his original counterpart. In the end, Finn, Princess Bubblegum and Lemonhope manage to escape the earldom with the help of Lemongrab 2 and the Lemon People.

In "Lemonhope Part 1," Lemonhope is being tutored by Princess Bubblegum so he would save the Lemon People in Lemongrab, which has become a totalitarian city-state under the Earl's cruel regime. The Princess explains that she cannot intervene due to various pacts and treaties in place with the Earldom. Lemonhope, however, resents this destiny being imposed upon him and longs to be truly free. When Princess Bubblegum accidentally refers to his attitude as "unacceptable," an upset Lemonhope runs away to experience "freedom."

After running off, Lemonhope encounters and secretly boards a sand pirate ship. However, it is attacked by a Greed Lard and Lemonhope becomes shipwrecked in the middle of a desert. He loses a considerable amount of weight as he dehydrates, subsisting on limes left in the ship's hold. In "Lemonhope Part 2," Lemonhope is rescued by a monster hunter named Phlannel Boxingday and travels with him around Ooo. However, Lemonhope remains concerned about the Lemon People, and Phlannel explains that he needs to face his "debt unpaid."

Lemonhope returns to Castle Lemongrab, where he successfully defeats the Earl by playing his harp. After the Earl's explosive death, Princess Bubblegum sews up the pieces of him and his twin together to create Lemongrab 3. She suggests that Lemonhope take on the role of champion of Lemongrab while the new Earl regenerates into a single being. She had already made up a room in the castle for him and even wrote a song to celebrate his return. However, Lemonhope turns down the job and leaves the earldom after stating that he would return in a thousand years or so once he became tired of freedom.

True to his word, Lemonhope returns to the Candy Kingdom many years later. He sees that the Candy Kingdom has been deserted and Finn and Jake's tree fort now extends high into the sky. He ventures into the now-empty Castle Lemongrab to the room Princess Bubblegum had prepared for him and lies down to go to sleep, finally satisfied with the life of freedom he had lived.

Before his return in the future, Lemonhope was shown listening to Jake's broadcast while flying on the back of a giant bird in "Jake the Brick." He also appears on an unknown island that Susan Strong and Frieda sail past in "Come Along With Me."

Lemonhope values freedom above all other things and longs for the ability to choose how he lives his own life. However, Lemonhope's desire for freedom causes him to shun his responsibilities and obligations to others. In "Lemonhope Part 1," he resists Princess Bubblegum's attempts to convince him to free the Lemon People from the tyrannical Earl and states that, "They set me free, and free means I decide what I do, not them and not you!" Later, when Princess Bubblegum accidentally refers to his attitude as "unacceptable" (the Earl of Lemongrab's main form of verbal abuse), an upset Lemonhope runs away from the Candy Kingdom to experience "freedom." Lemonhope also expresses his longing for freedom in dreams as he appears as a young bird trying to leave the nest, a puppet held by chains, and a horse weighed down by Bubblegum and Lemongrab 2's demands that he be a hero. In the end, however, Lemonhope returns to rescue to Lemon People from the Earl, but only to assuage his feelings of responsibility.

Lemonhope often appears to be selfish and uncaring towards others. He does not concern himself with the lives of other people and tries to explain this by saying, "I got me and they got them." Lemonhope also does not like to share with others as shown when he refuses to give Finn any of his cupcakes by putting his thumb on them. However, Lemonhope's negative traits are not uncommon as he is still a young child and a Lemon Person.

Despite all of this, Lemonhope has also has several good characteristics. Lemonhope is very brave as he remains calm despite facing several near death situations in Lemonhope Part 1 and 2. He was also able to infiltrate Castle Lemongrab and confront the Earl, despite his fears. Lemonhope is adventurous as he seems to enjoy the freedom of wandering the land without any particular destination. He also demonstrates this when he refuses Princess Bubblegum's offer of a life of comfort in the Earldom as its champion and immediately leaves the castle after freeing his people. He instead travels throughout the Land of Ooo for many years before returning to his home. Lastly, Lemonhope is persistent as he holds firm to his ideals and maintains a positive outlook on life despite its hardships. He demonstrates this when he survives in a desert for a long period of time, surviving only on lime juice. Once his food supply ran dry, he travels through the desert until he was physically incapable of going any further. 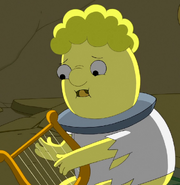 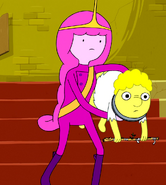 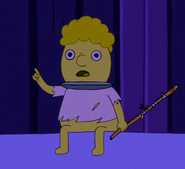