Lemongrab 2's physical form is exactly the same as the original Lemongrab's. He wears an all white version of Lemongrab's outfit, and has a baby blue belt and boots rather than a green sash and dark grey boots as Lemongrab does. Both outfits have the same light green lime on the sash or belt. Lemongrab 2 has a staff with an emerald gem.

Lemongrab 2 and Lemongrab "are a lot like twin brothers," according to storyboard supervisor Ian Jones-Quartey.[1] Not only are they made of the same formula and genetic material, they love each other and care for each other immensely. Lemongrab 2 was quick to befriend Lemongrab, and enjoys his company.

The Lemongrabs have several Lemon Children, whom they love and care about immensely. The Lemongrabs see themselves as fathers to the young people they create, and made a point to welcome each new offspring into the world with a smile and a name. The earls love their kids so much that they used all of their food to keep making more of them. When the Lemongrabs prepare to leave to speak to Princess Bubblegum, they notified the children "so they wouldn't worry while they were away." The Lemongrabs prepared to conquer the Candy Kingdom to use all of their candy to make more children, and create an army to steal all the candy in the world to feed their children. The Lemon Children seem to return this affection to their fathers.

The relationship that Lemongrab 2 has with his mount has not been fleshed out in the events of the show. However, Winged Lemongrab Horse has been seen smiling when Lemongrab 2 is sitting on it, indicating that Lemonegasus likes Lemongrab 2 and doesn't mind living with him in Castle Lemongrab (as opposed to Lemon Camel, who doesn't appear to care either way.)

He is Swallowed whole by is brother Earl of Lemongrab for breaking his doll's head on the floor. 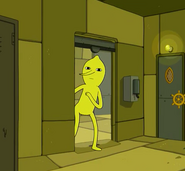 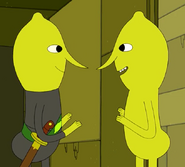 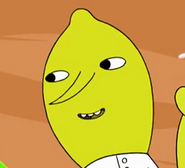 So very normal.JPG
Add a photo to this gallery

Retrieved from "https://adventuretime.fandom.com/wiki/Lemongrab_2?oldid=527563"
Community content is available under CC-BY-SA unless otherwise noted.