The Lemon Children are the creations of the Earls of Lemongrab, whom they refer to as "their boys" after Jake uses this expression. Four of the children that the Lemongrabs referred to by name are Lemonjon, Seed-Wad, Plop-Top, and Lemon-Sweets.

The offspring of the Earls of Lemongrab seem quite young, cannot speak in more than monosyllabic grunts or shrieks, and seem to be unintelligent. Lemonjon is the exception to these rules. The Lemon Children are loyal to the Lemongrabs and support their ideas. Lemonjon showed concern for the rest of his siblings and his fathers. The children that have tails wag their tails when they're happy. 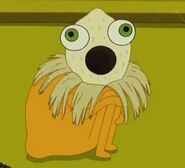 Add a photo to this gallery
Retrieved from "https://adventuretime.fandom.com/wiki/Lemon_People?oldid=524205"
Community content is available under CC-BY-SA unless otherwise noted.