"Hero Heart" (as Pink Lemon Camel)
Lemon Camel is the Earl of Lemongrab's camel,[1] which he uses for transportation. In "Too Young" it is shown entering and exiting the Candy Kingdom.

Its tail and head are shaped like lemons, while its nose and body slightly resembles the shape of one. It is yellow, like Lemongrab. Lemon Camel has a large, fat body and skinny legs. It has very tiny feet, narrow eyes with dark pupils, a green tongue, and a large nose, like Lemongrab. When Lemon Camel is startled, it is revealed to have quite a large mouth filled with many slightly pointed teeth.

Lemon Camel, although not mute, is decidedly quiet and passive. Like any camel, it is obedient towards its master. It calmly watches Lemongrab and the other candy people after entering the castle, placidly watching its master launch tirades against his subjects. But like everyone else's, Lemon Camel's eyes widen in surprise whenever Lemongrab shouts particularly loud or suddenly. In "You Made Me," it is shown that Lemon Camel hangs out at Lemongrab's left-hand side in Castle Lemongrab's throne room. Lemon Camel is quite passive, and uninvolved with the Lemongrab's emotional turmoil. When Lemongrab becomes upset about the Pup Gang disobeying him, Lemon Camel stares off into space, completely ignoring the screaming Lemongrab. Even as Lemongrab startles it by suddenly jumping on it and clasping its back, Lemon Camel obeys Lemongrab, and goes where he wants it to go.

Beady-eyed Lemon Camel in the storyboards

Lemon Camel, as it appeared in the storyboards

The original storyboarded ending to "You Made Me" 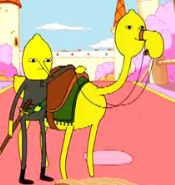 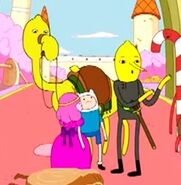 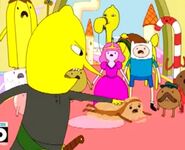 Lemon Horse in the Adventure Time Dude-It Yourself Journal

Lemongrab with his clone on the camels