"Bespoken For"
"Wizard City" (Distant Lands)
Leaf Man is a character who first appears in "Wizards Only, Fools." He is apparently a wizard. In "Thanks for the Crabapples, Giuseppe," he rides the bus to Big Butt Rock with Ice King, Abracadaniel, Ron James, the Ancient Sleeping Magi of Life Giving, Little Dude, Beau, Giuseppe, and later some Water Nymphs. He is referred to as "Leaf Wizard" in the episode storyboard. He also appears in the comic series "Adventure Time: Ice King".

Leaf Man is simply a man that is a leaf. He is flat, and his head is shaped like a leaf. On his head he only has two eyes and no mouth, making him incapable of speech. The left side of his body is a lighter shade of green than the right side of his body.

Leaf Man in "Wizards Only, Fools"

Leaf Man on the far left 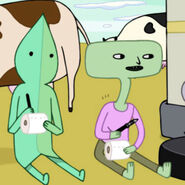 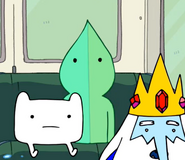 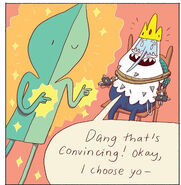 Leaf Man on the class schedule in "Wizard City"
Español
Community content is available under CC-BY-SA unless otherwise noted.
Advertisement