Tom Kenny
Laser Wizard is one of the competitors in the episode "Wizard Battle." He can shoot red laser beams out of his eyes and hands. Laser Wizard also appears in "Reign of Gunthers" alongside Bufo and Forest Wizard. He appears with them again in "Wizards Only, Fools," pouring salt in a ritual to sacrifice Abracadaniel before teleporting away with the others when the Wizard Police appear. He summons Bella Noche in "Betty" with the society and has his powers sapped by the creature, but is seen with his powers back after Bellanoche is defeated.

He wears a purple and yellow suit, and has a diamond-shaped hood. The yellow portion of his hood extends into a cape that resembles coattails. He usually levitates in a manner similar to Marceline.

In the top right corner 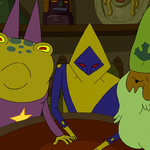