The lamb relic (also known as the porcelain lamb) appears in "Beyond this Earthly Realm." The lamb is found in the cave Finn and Jake were exploring. Finn conjectures that it has some sort of "sacred significance." Upon touching it, it transports Finn to the Spirit World. Similarly, in an effort to break it, Ice King touches the lamb and is transported into the Spirit World. When each are transported, their faces appear on the lamb on the front and back. Both Finn and Ice King are returned to the material plane when the lamb is broken. 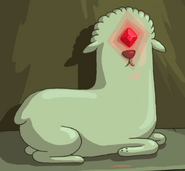 Lamb relic before Finn touches it