"Adventure Time with Fionna and Cake Issue 3"
The Lady Lemongrabs are the female versions of the Earl of Lemongrab and Lemongrab 2. Their first appearance is in the third issue of the gender-swapped Adventure Time comic's back-up story, Sour Candy, by Kate Leth. The narrative is about Lady Lemongrab making a surprise cake for her partner, Lady Lemongrab, and for their children, for a holiday that the two created. It is deemed "acceptable," and they host a "Happiest Lemon Day" for their family.

At least one of them appears to hold an uptight personality (similar to the Earl of Lemongrab), but also appreciates partying with the Female Lemon Children. One of them was most likely the first of Prince Gumball's experiments gone wrong, created to rule the Candy Kingdom whenever he is unable to. The other was most likely created to be a companion of the first in their castles, similar to the story of the Earl of Lemongrab and Lemongrab 2.

The Lady Lemongrabs are some of the few overtly humanoid Candy People. They have yellow, lemon-textured skin, bulbous, lemon-shaped heads, and long noses. In addition to this, they have oval-shaped eyes with eyelashes and black circles as irises. They also appear to have some long teeth, although not as overtly sharp as their male counterparts. Like many of the Adventure Time characters, they have thin, noodle-like limbs and a lean torso; However, their behind sticks out noticeably and the profile of their bodies closely resemble jelly beans. Unlike the original Lemongrabs, the Lady Lemongrabs each have two butt cheeks, as opposed to just one large one.

The last panel from Sour Candy 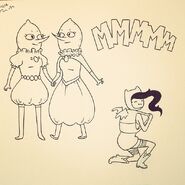 Sketch of the Lady Lemongrabs by Kate Leth