Princess Bubblegum and Lady Rainicorn look for Finn and Jake, who are missing after a run-in with the Ice King.

Princess Bubblegum and Lady are trying to find Finn and Jake who have been missing for three weeks after battling with the Ice King. Lady discusses her apprehensions while Princess Bubblegum makes some tea with her Tea robot. Bubblegum then tells her that the Ice King is not a major threat and with science on their side, they have the advantage. Lady and Bubblegum then fly off into the black ice cave where she cannot get any signal on her GPS and relies on her heart signature machine where three heart signatures are detected, thought to be Finn, Jake, and Ice King. She also sees several hearts on the monitor but dismisses them. They both go into a realm where they are attacked by an army of evil hands. They escape, and Bubblegum hears the Ice Kings voice through an air vent. Bubblegum tells Lady to proceed, using the heart signatures as navigation. They are nearly crushed by an enormous tongue, and Lady flies into another room. Much to their surprise, giant eyes on the wall open and shoot laser beams. Lady is hit and badly injured, unable to fly.

Bubblegum carries Lady into a dark passageway. After noticing that she is near Finn and Jake, she finds Ice King on the floor, with a hole in his chest and what seem to be veins spread on the floor. Bubblegum then drops the heart monitor in surprise as Ricardio reveals himself to be the real culprit. He throws Finn and Jake on the ground in front of Bubblegum, who are poisoned by Zanoits. Ricardio reveals that he had spent his time in Ice King's body using his tissue to make his new body. He then recalls how he only wanted Bubblegum's heart last time, and this time, he wants "the whole package." Ricardio takes Lady from Princess Bubblegum and ties Lady in a knot, throwing her in a corner after that. Ricardio then leans against the princess and asks her to marry him. Bubblegum agrees to marry him if Ricardio can beat her in hand-to-hand combat. Bubblegum angrily dismisses Ricardio's advances and then tears his limbs apart. She kicks him in the face and warns him to never return. Ricardio escapes into the shadows.

Two days (and another day for the antidote) later, Finn, Jake, Ice King, and Lady Rainicorn are healed, in the Candy Kingdom's Castle's Hospital. Finn wakes up, freaks out that Ricardio has returned and is in the black ice cave. Princess Bubblegum tells Finn that everything was taken care of and shows Finn and Jake that she made a new heart for Ice King out of Ricardio's sinews, toffee, and maracas. She walks over to Lady Rainicorn and apologizes for putting her through danger, saying that she "saw it [the five small dots next to Lady's] (which happens to be the puppies) on the heart monitor" and she "didn't know." The episode ends with Lady tearfully saying "I am pregnant!" in English to a surprised Jake. He responds, "I'm-- puppies?!" 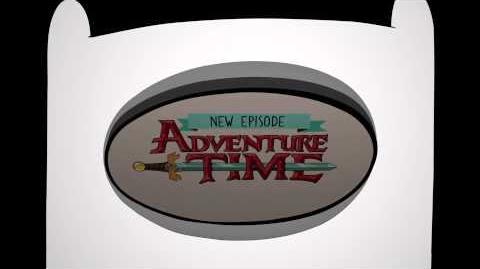 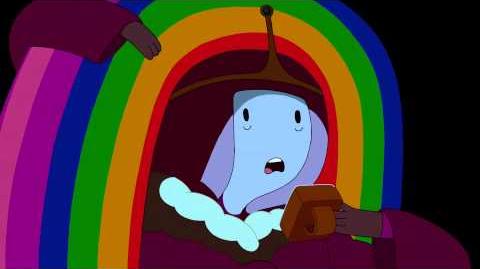 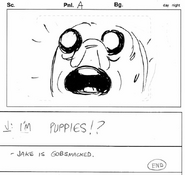 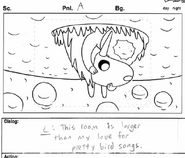 The Ball Blam Burglerber called the "ball buster" in the storyboard

The Electrode gun in the storyboard.

Original version in which Princess Bubblegum says Finn and Jake have been missing for three days, not weeks
Add a photo to this gallery

A sight for sore eyes indeed

Finn and Jake poisoned with Zanoits

"I saw it in the heart monitor. I didn't know." The first hint that Lady is pregnant.

Retrieved from "https://adventuretime.fandom.com/wiki/Lady_%26_Peebles?oldid=810777"
Community content is available under CC-BY-SA unless otherwise noted.