Kompy's Kastle is a video game that can be played on BMO or a portable game console as seen in "Who Would Win." The game revolves around moving from screen to screen and satisfying the title character's bloodlust. Jake seems to be very attached to the game and has the third highest score in the Candy Kingdom. In the co-op mode, one player plays as Kompy while the other clears obstacles to help Kompy proceed. This game is also Finn's favorite as Jake says in "Beyond this Earthly Realm." In the beginning of "Davey," Jake is seen playing it as Finn slays the Dragon. 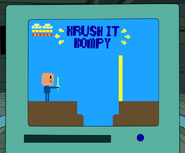