"Puhoy"
Knife Storms are similar to normal storms, but instead of water, daggers rain down. One occurs in the episode "Rainy Day Daydream." They are apparently rare, as Finn claims never to have seen one before (though Jake already knew what it was). Right before Jake pulls him into the Tree Fort for shelter, Finn calls the storm "beautiful." A knife storm also occurs in the episode "Puhoy" (three years later in-show).

In both occasions, Finn and Jake are confined to their Tree Fort, forced to come up with ways to pass the time. In "Rainy Day Daydream," Finn and Jake use their imaginations to create a Bazooka Goblin, a Riddle Master, an Imagination machine, and more. In "Puhoy," Jake builds Finn a pillow fort during the storm, unknowingly giving Finn access to Pillow World. 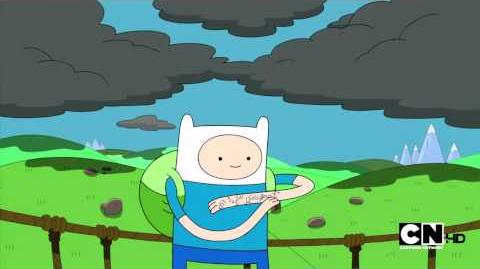 One of the knives close up