"The Chamber of Frozen Blades"

"Orgalorg"
Kitten is Gunter's offspring, first seen in "The Chamber of Frozen Blades" in the Ice Kingdom. It appears to be magical in some way, as when it hatches it is glowing and floating and it also has a heart symbol on its forehead. Doctor Princess said that the birth was "horrifyingly beautiful." In "Princess Monster Wife," Kitten makes a brief appearance as Ice King starts singing to his wife. It is also seen at the end of the song before Ice King reveals his sculpture. In "Reign of Gunters," it plays a major role in assisting the penguins by using its laser vision.

It is a kitten that is completely pink, except for a red heart on its forehead. It has large blue eyes with black pupils. It has pointed ears and a thin tail.

The Kitten can levitate and emanate a yellow aura even while sleeping. It can also focus its aura into explosive bolts of energy, which it uses to break down the Candy Kingdom wall in "Reign of Gunters."

Gunter's offspring in the storyboard 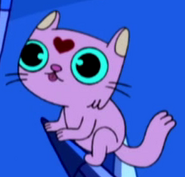 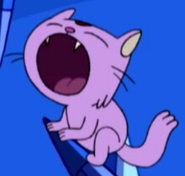