Adventure Time Wiki
Register
Don't have an account?
Sign In
Advertisement
in: Characters, Who Would Win Nominations, Recurring Characters,
and 7 more
English

"Come Along With Me" (cameo, as Waxman of Ooo)

The King of Ooo (referred to in the Candy Kingdom as the Princess of Ooo, often called KOO, and referred to as the Waxman of Ooo as of "Come Along With Me"[1]) is a criminal and the former ruler of Candy Kingdom who first appears in "Apple Wedding." He is a controversial figure in the Land of Ooo of debatable power, who travels in a rigid airship, otherwise known as a zeppelin, which he calls his "zep" and apparently maintains a website, "kingofooo.com." He seems to hold a cult-like sway over some inhabitants of Ooo who consider him their proper ruler, though it is unclear if he actually is a king or just a con artist taking advantage of his "subjects." King of Ooo reappears in "Ocarina" on a wanted poster at the Candy Kingdom police station and as a golden statue seen in Kim Kil Whan's house. The former suggests he may be a criminal or he may have possibly been charged with fraud. He appears in person once more in "Gold Stars" tricking Sweet P into helping him rob numerous Candy Kingdom citizens.

In "Hot Diggity Doom," the King has regained his "zep" and his following thanks to help from a mysterious helper who turns out to be Orgalorg. He successfully runs against Princess Bubblegum for control of the Candy Kingdom (even getting Sweet P back on his side), winning in part because she is too preoccupied with the Catalyst Comet to campaign against him, as well as Bubblegum creating the Candy People with low intelligence to eliminate any potential dissent against her rule, rendering them unable to realize the difference between a good leader and a bad one. The kingdom then almost immediately descends into chaos as the Catalyst Comet arrives. The king immediately realizes this and was saddened when he thought that it was his fault. Toronto consoled him and he came to the conclusion that it was Princess Bubblegum's fault. He is ruler of the Candy Kingdom from the end of "Hot Diggity Doom" to "The Dark Cloud" when the Candy People choose to rebel against his leadership, and Crunchy pushes him into a fireplace, taking the throne. The King of Ooo flees through the candy streets as an amorphous blob of earwax and eventually reforms into a childlike form known as "Waxman of Ooo" as seen in "Come Along With Me."

The King of Ooo is a tall golden being with thick puffy golden brown hair (which is revealed to be a toupee in "The Dark Cloud") and a mustache, along with a single mole on his face. He wears a broad-shouldered brown coat with gold trim and several gold rings, which has a lighter brown pair of pants and button-down shirt beneath it, along with a crown. He carries a scepter with a winking smiley face on it. According to the Adventure Time crew, he is made of earwax; this is confirmed by the King as he mentions his "waxy heart" in "Hot Diggity Doom." In "The Dark Cloud," Crunchy pushed him into a fireplace, reducing the King of Ooo to a melted pile of goop. As the Waxman of Ooo in "Come Along With Me," he is bald and short, wearing only a leaf.

Princess Bubblegum does not accept his authority as a king. Also, she personally dislikes him, even going so far as to break into his blimp to search it and prove him a fraud and con man. There, she finds an expired certificate stating his right as a priest for Tree Trunks's wedding. She tries using this as a reason to arrest him, but she is proven wrong when the King Of Ooo tells her she probably found it in the old section of his blimp, and pulls out a new certificate out of his pocket. Princess Bubblegum nevertheless has him arrested and thrown in the Candy Dungeon, along with the other attendants of the wedding when they protest her poor behavior and refuse to recognize her authority.

Despite Princess Bubblegum's animosity towards him, Tree Trunks and Mr. Pig do apparently recognize him as "the One True King of Ooo," along with a number of their relatives. He is shown making metaphorical declarations to Mr. Pig's relatives, such as interpreting their imagined "thought-forms" and granting "one year good luck" to them based on their "visions." In addition to the support of various individuals, the King of Ooo also works closely with his companion Toronto. In "Gold Stars," they both work together in robbing the people of the Candy Kingdom.

The King of Ooo usurped Bubblegum's throne through a "barely yet fully legal" election and was temporally the ruler of the Candy Kingdom. He likely did so as revenge for locking him up in "Apple Wedding." At the end of the miniseries Stakes, the Candy People rebel against the King of Ooo's regime, and Crunchy usurps the throne. At the end of the episode "The Dark Cloud," Princess Bubblegum states that she intends to usurp Crunchy and regain the Candy Kingdom.

Generally, the King of Ooo maintains the appearance of a benevolent ruler. He does this by acting kind and amiable in front of his "subjects." However, this act is in order to exploit his followers for his personal use. This is seen in "Apple Wedding" where the King's dubious authority includes a clause in the wedding vows that would have made Tree Trunks and Mr. Pig his servants for five years.

Because the rulers of the various "kingdoms" in Ooo are princesses, it is probably more accurate to say that Princess Bubblegum (as well as all other regnant princesses) is the ruler of a principality (The Candy Principality) that in turn would be subject to the sovereign to a king of Ooo. Principalities (in the real world) can be sovereign, but more often than not the prince or princess of the realm is subject to the King. The fact that Princess Bubblegum does not recognize his authority likely means she does not recognize Ooo as being a unified Kingdom and views her principality as sovereign.

The true nature of the King of Ooo can be clearly seen in "Gold Stars" as he is willing to use Sweet P, an innocent child, for personal gain. In the episode, the King abducts Sweet P from his school and pretends to be his dance teacher. He then uses the boy to distract random Candy People so that he can easily steal their valuables. In addition to theft, the King of Ooo was willing to "take care" of Sweet P when the boy discovered that the King was merely a criminal.

The King of Ooo's first appearance in the Tumblr banner. Note Bubblegum's reaction to him. 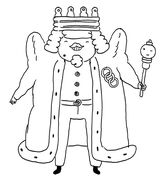 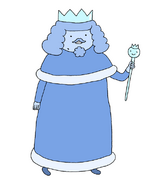 "The Queen of OOO" by writer and storyboard artist Steve Wolfhard

The King of Ooo's crown in "The Tower" storyboard

King of Ooo's living quarters on his "zep"