The episode starts with Finn waking up to Princess Bubblegum calling him her king. He then realizes he is in the Candy Throne wearing a crown and is being watched by a group of Banana Guards. His crown floats to the ceiling and when he looks at the group of Banana Guards again, they are upside-down. He looks over at Princess Bubblegum's shoulder and sees the King Worm; It jumps out of the window and the scene changes. Finn is sitting with Flame Princess, who calls him honey and tells him to eat his soup. He doesn't respond quickly and Flame Princess angrily yells for him to eat it. He eats some of it and closes his eyes and the room morphs to a room like one in the Tree Fort. Flame Princess soon changes into Peppermint Butler, holding the King Worm, who explains that Finn needs to find the worm and break it. Finn points out that Peppermint Butler is holding the worm, but it turns into a spoon. Peppermint Butler throws the spoon at Finn, and then Finn notices Jake in another room through a window. Jake is wrapping a gift with Lady Rainicorn, who is speaking English in a very deep voice. Finn sees King Worm escaping through a small hole in the wall and jumps in the room after it. He and Jake start to talk and they realize that they are in a linked dream with one another. Jake states that he doesn't think Lady Rainicorn is real and they decide to follow the worm through the hole, which is a problem because the hole is too small.

Jake explains that because it is a dream, Finn can do whatever he wants. He then imagines a sword capable of blasting a hole in the wall and is happy with himself for not dreaming up weird stuff. The sword then turns into a shark and Jake tells him that he needs to be careful, because if he fills the world with his subconscious fears it will fall apart. Jake tells him to just shrink down and the two of them go through the worm's hole. They wind up in a field with Ice King running towards them. Ice King calls them Fionna and Cake and tells them that he's really made a mistake. Finn and Jake are confused until two monsters made up of a bunch of penguins show up. Finn and Jake run away until they find their dad, Joshua, who isn't responding to anything they say. Joshua starts knitting, and eventually his knitting turns into the King Worm. King Worm then bolts to a nearby mountain and Finn and Jake chase after him. As they reach the top, they find a frozen King Worm. They grab a nearby rock that appeared from nowhere, break the worm, and the dream fades away.

Finn and Jake wake up in their room and start asking one another if they're okay, and celebrate that they did it. Finn then notices a mirror wavering in the background, and upon closer inspection realizes his reflection isn't normal. Jake then tells him that it's fine, but Finn points at a mug filled with liquid that's falling to the floor, breaking and then reversing back to it's initial state repeatedly. Finn realizes that Jake pinched him earlier, but he never pinched Jake back. He starts trying to pinch him, but Jake backs away telling him that everything is fine. When Finn finally catches Jake, his skin melts away and Finn realizes for sure that he's still dreaming. King Worm then rises from the melted Jake, and says that Finn can't defeat him. Finn starts to attack, but realizes something is missing and gets depressed. The ceiling cracks and a chunk falls on King Worm's head. He tells Finn to "knock it off" which causes Finn to remember what Jake said about fears breaking down dream-scapes.

Finn concentrates on his deepest fears and saltwater begins to pour from his navel and fill up the room. The Lich then crawls out of his bellybutton and Finn freaks out. The clearly deteriorating worm tells him to calm down, to which he replies, "Never!" Princess Bubblegum comes out next and Finn starts to feel relieved until she tells him to quiet down because she's having coffee with The Lich and he wouldn't understand because he's "too young." This freaks him out even more, and causes more damage to the worm. He then remembers Ghost Lady and continues to be horrified as the worm deteriorates to near nothing. He asks the King Worm to stop one final time, but the worm claims he doesn't know what Finn is talking about. Finn strains and a clown pops out of his navel. The dream breaks and Finn is with Jake in his living room with the shriveled King Worm. Finn then orders the worm to get out of his house, and the worm complies meekly. Finn pinches Jake to be sure he's awake, and the episode ends.

Promotional art
Add a photo to this gallery 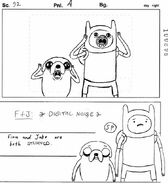 "Get out of our house King Worm!"

Jake wrapping a present with tape.

Finn's King Crown on the ceiling.

Finn and Jake coming out of a cave.

Finn and Jake in the cave.

Finn's fear of the Lich

The Lich, laughing inside Finn's dream

Princess Bubblegum having a cup of coffee with the Lich.

The blue "copy" Finn passing by the window.
Add a photo to this gallery