Matt L. Jones
King Huge is the ruler of Huge Kingdom. He is a gigantic humanoid, with many servants, whom he calls "Food Boys", to feed and take care of his needs. The King Huge has a passion for clocks especially the clock shown in "Walnuts & Rain." Following the events in that episode, King Huge gets furious after Finn destroys his clock and orders his "Food Boys" to capture Finn; however, Jake intervenes and punches King Huge in the face.

King Huge has the appearance of extremely plump green humanoid. He is completely bald except for his scalp near his upper-ears covered with little patches of brown hair. He wears a gold crown and a long robe in the color of blue with white (black spotted) folds. He also wears a pink and pink-white faded pants striped underneath his robe.

King Huge depends much on his Food Boys to feed and take care of his needs. In the episode "Walnuts & Rain," Finn falls into his kingdom and he treats Finn like his child forcing him to stay in his kingdom by duping him with food and telling him that good things will come if he stays. King Huge also has avid passion for his clock and gets extremely excited when it chimes. At the end of the episode, it was clear that he was trying to kidnap Finn by tying him up. This could mean that he was desperate for someone to be with him in his kingdom 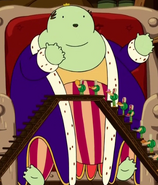