Kim is the founder of a successful real estate business called K.K.W. Enterprises. He lives in a tall, luxuriously-appointed house in a far corner of Ooo. Finn notes it is like "a fairy tale." Kim Kil Whan is also married to a bear named Pat and they have a daughter named Bronwyn.

Kil Whan has a very long, reddish-orange body, similar to Hot Dog Princess, but with physical traits inherited from his parents. Kil Whan has a relatively long body like Lady Rainicorn, making him the largest of all the pups, and a face that perfectly resembles Jake's, but with a short white horn and a strict scowl. At the end of the episode "Jake the Dad," Jake states that Kil Whan has grown a beard due to his early aging.

In contrast to his free-spirited father, Kim Kil Whan is extremely serious, and sometimes attempts to discipline Jake to make him more responsible. In "Ocarina," he does this by buying out the deed to Finn and Jake's Tree Fort from Marceline in exchange for a lunatic bass guitar, then rents it out as thirty-seven apartments to force Jake to get a job and "grow up." He finally trades the deed back for a (non-working) ocarina Jake says he can use to think of his dad's love whenever he "plays" it.

Although he loves his father, Kim Kil Whan does not approve of Jake's childlike behavior. In "Ocarina," he tries his best to get Jake to act responsibly and more like how an adult should act. He does this by getting his father to move out the treehouse, and look for a job. However, by the end of the episode, he learns to love his dad just the way he is.

Kim Kil Whan respects his mother and they're both on good terms. However, they seem to always disagree on Jake (his dad), who to them, rarely visits.

Kim Kil Whan's strict personality and responsible behavior often bores his brother and sisters. Since he is the most mature one, he never agrees to anything they say.

Finn is Kim Kil Whan's adoptive uncle. There is not much interaction between the two; however, in "Ocarina" he also wanted Finn to mature and get a job, alongside Jake.

Pat is Kim Kil Whan's wife, first introduced in "Ocarina." Little is known of their relationship, but she was shown to be supportive of his efforts to get Jake to mature.

Kim Kil Whan briefly interacted with Marceline in "Ocarina," where he had traded a lunatic bass guitar to her in exchange for the deed to the Tree Fort.

She is the daughter of Kim Kil Whan and was first seen pictured on their end table at the end of the episode "Ocarina." She appears again in "Wheels" where Kim Kil Whan is unsure how to approach Bronwyn regarding her poor academic performance. After attempting to find the reason through her grandfather, Kim Kil Whan ultimately decides to discuss matters with his daughter directly. When they meet, he apologizes for not coming straight to her, and Bronwyn admits that she got carried away with her skateboarding.

Kim Kil Whan's top employee. Not much is known about Rennie's personal feelings towards his boss, but he is shown to be very passionate about real estate. It is Rennie's traumatic encounter at Joshua and Margaret's old office that kicks off the events of "The First Investigation."

Kim Kil Whan in the promo art of "Jake the Dad" 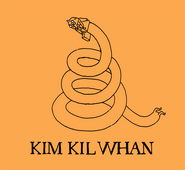