"All the Little People" (As a Little Person)

Maria Bamford
Kim is a character who appears in the episode "Freak City." Kim is a leg when first seen and later she forms the left leg of Super Freak. She is turned back to her original form by Magic Man at the end of the episode. Kim says she "freaking hate[s]" Trudy, and in leg form, she seems to enjoy kissing a tin can. She speaks with a thick Brazilian accent.

In her original, humanoid form, Kim has light-red skin, one green eye, and long black hair with a red outline. She also has a jar filled with a skull in solution and attached to a hypodermic needle, attached to her left arm. She wears a black eyepatch over her right eye, a long-sleeved white dress with a high collar, and knee-high red boots.

Kim with a can 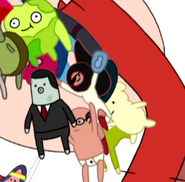 Kim in "All the Little People"