John Moschitta Jr.
Key-per, or Gate Key-per, makes his first appearance in Adventure Time in the episode "The Enchiridion!" His key-shaped hat is, in fact, the key that opens the gate to Mount Cragdor. (This means that the Key-per himself must be literally inserted into the lock). After Finn uses him to open the gate, the Key-per asks how Finn figured it out. Finn replies, "I just thought you'd look cute stuffed in that lock." The Key-per affirms Finn's choice, saying this is the answer to the riddle. He also says that this is the same conclusion that previous adventurers reached to enter, but Finn and Jake are already leaving him behind.

Key-per is able to talk very fast, as is Booko in "The Lich," and his speeches are usually difficult to understand because of how quickly he says the words. He is the gate keeper to the pathway of The Enchiridion. After defeating the Dark Magician, Finn, in his rage, sees Key-per in red, devilish pajamas, mistakes him for another trial, and punches him in the stomach. The Key-per, lying hurt on the ground innocently, explains that they are his pajamas. He then makes spaghetti for the picnic after the quest along with Mannish Man, Finn, Jake, and a couple Old Ladies.

The Key-per is short and tubby, has yellow skin, and wears a baby-blue robe. He has tiny arms and chubby cheeks, and he appears to be missing teeth. He has round black dots for eyes, and unlike most other characters, he has visible slits for nostrils. He wears a key-shaped necklace on a chain, and a blue-grey hemispherical hat adorned with a large key in the shape of a backwards F (resembling an old skeleton key). His hat has a strap with a brown buckle, and appears to tightly squeeze his face.

The answer to opening the door is to actually shove the Key-per into the door.

The Key-per is a very skilled chef. 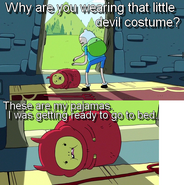 The Key-per in his pajamas