Seo Kim
Somvilay Xayaphone[2]
"Ketchup" is the twenty-fifth episode in the eighth season of Adventure Time. It is the two hundred and sixty-third episode overall.[1]

Finn and BMO are sailing on Jake who has taken the shape of a boat. The three land on an islet and then collapse from fatigue. The islet spontaneously transforms into a cat with legs on its back. Marceline interrupts the sequence rhetorically asking for clarification. BMO ignores Marceline and continues with his story. While the trio ride on the cat's back, a large blue jay hollering comes into sight. The blue jay continues to holler until the cat flys off and breaks contact with it. Others boats flying into the sky come near the crew, and Finn begins singing a song. BMO's flashback ends with the cat and other boats flying off into the clouds. 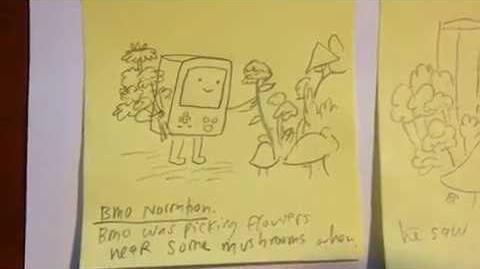 Retrieved from "https://adventuretime.fandom.com/wiki/Ketchup?oldid=809918"
Community content is available under CC-BY-SA unless otherwise noted.