Kelly was originally born in Atlanta, Georgia of the United States. She is most well known for her work with Nemo Cases, "Backup Band." 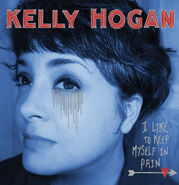