June 13, 1985 (age 36)
Julia Pott, born June 13, 1985, is a British animator, writer, and film director. She has written many episodes for the last few seasons of Adventure Time. She began writing at the beginning of season nine and stayed as a writer all up until the final episode, Come Along With Me.

Julia is known for other works on Cartoon Network as well. She is the creator of the series, "Summer Camp Island," which was aired on July 7th, 2018. 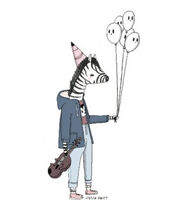