"Joshua and Margaret Investigations" is the sixteenth episode in the sixth season of Adventure Time. It is the one hundred and seventy-second episode overall.

Finn and Jake's parents hunt an unearthly menace in the woods.

The episode opens up in the treehouse where Finn, Jake and BMO are celebrating Jake's birthday. As Finn and BMO chant "Birthday," Jake gobbles his birthday cake. Finn mentions to Jake how he's a year older but still looks good, Jake replies saying that it's thanks to their "Mom and Dad" passing down good genes. Finn begins to remember his foster parents, Joshua and Margaret, prompting him and BMO to ask Jake to tell a story about their parents, a "Birthday story." Jake then proceeds to tell his story.

The scene changes into a flashback when Margaret was still pregnant with Jermaine. Margaret is seen fiddling with her crossbow when Joshua interrupts her with dinner, two steaks. As they were eating the steaks, Margaret told Joshua to check for new cases. Joshua refused at first, as he was concerned about Margaret managing in her child-bearing state, however she managed to convince him she could handle it. As Joshua looks through the cases, he finds a case described as 'Woman's pies going missing'. They left their house and drove their car to Tree Trunk's House to investigate. Upon their arrival, Tree Trunks complains about a monster that has been stealing her pies, when suddenly they encounter Wyatt, climbing in through the window.

Wyatt then revealed that he was the one who ate the pies, and planted false footprints wearing a pair of tennis rackets on his feet. Joshua and Margaret then assumed the case closed, and prepared to leave, but Tree Trunks informed them that there was still a real monster nearby, due to her getting rubbed on her elbow. They decided to investigate the scene, Joshua reluctant, but doubting the credibility of the claim, therefore assuming it would be alright for Margaret to come along. Upon reaching the location, they found actual footprints of the alleged monster.

Following these footprints, they were led into the forest surrounding Tree Trunk's house. Joshua was becoming increasingly convinced that an actual monster existed, became more worried about Margaret and moved they discontinue the case. However, Margaret ran deeper into the forest, forcing Joshua to follow. They followed the footprints into the brush, when suddenly a strange blue cat lept out of a bush in front of them. The blue cat turned out to be a shape shifter, its true form later seen as a Shape-shifter. The creature bit Joshua on his head, causing Margaret to pull out a pin from her hat and shank the creature in its side, wounding it. Hurt, it ran back off into the forest, dripping 'blood' on its way back to it's lair.

Back in their house, Joshua is seen with a bandage on his head, covering the wound where the Shape-shifter's venom quickly spread after entering his body. Joshua suggested that Margaret end his misery and kill him with his sword. However Margaret wouldn't hear it, and quickly tried to find an antidote for the venom in the Book of Poisons. The book stated that she needed to obtain more venom from the creature to develop the antidote. She got geared up with ammo, weapons, and defense, and donned a new hat. After leaving a walkie-talkie next to Joshua, to allow them to stay in contact, she set off in search of the creature. The scene changes to Margaret parking her car back in the forest, following the trail the creature left behind when she suddenly found herself in the creature's lair. When she called Joshua on her walkie-talkie to check on him, we see Joshua at home with bulging veins. He accidentally steps on the walkie-talkie, crushing it, and we see a blue lump growing on his head as he moans.

Back in the house, she found the interior of her home in a wreck. As she was moments away from having the baby, she was in a bit of pain. Margaret entered the kitchen looking for Joshua and found him outside. She jumps out the window to see Joshua with strained veins and the huge lump on top of his head. Margaret, still having troubles with her baby, yelped in pain and noticed that Joshua's blue lump was fit to burst. After another yelp, they heard a loud splat noise and they shone the flashlight in the direction the sound came from. Joshua had essentially given birth to a puppy, Jake. Puppy Jake then sang and danced before falling back to sleep. Joshua and Margaret were both in shock, when suddenly Margaret's belly began moving a lot and she screamed.

The scene jumps to a forest with Joshua pushing a stroller with Jermaine and Jake asleep in it. When Joshua mentions the scar Jake left on his head, Margaret pulls out a fedora and places it atop Joshua's head. They discuss Jake's origins, and whether or not he could be a harmful creature. They decide to accept Jake as their son, and agree to never reveal to Jake how he was born.

The scene changes back into the present in the treehouse, whereupon Jake finishes 'And so they never told me.' Finn is confused on what Jake wasn't told, and questions it, but Jake replies saying " I don't know! They never told me!" 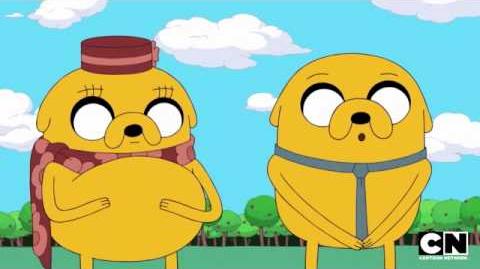 The Shapeshifter's lair, formerly known as the Pantheon of Savings

The book of poisons

The shapeshifter in portal mode

Time to leave this plane...

Jake dancing after his "birth"

This oughta bring back memories from the Nostromo...

Jake and Jermaine in their puppy years
Add a photo to this gallery
Retrieved from "https://adventuretime.fandom.com/wiki/Joshua_and_Margaret_Investigations?oldid=815145"
Community content is available under CC-BY-SA unless otherwise noted.