The Jigglers make their first appearance in the episode "The Jiggler." In the episode, Finn and Jake are followed by a Jiggler because Jake is whistling, and they take it to their Tree Fort, where they discover it has a love of dancing. Finn and Jake also discover that the Jiggler likes taking drawings off paper and eating them. When Jigglers are away from home for too long, they start feeling sick and begin to spew a pink fluid from their holes (which would be considered vomiting). They seem to communicate to each other by whistling. Jigglers also seem to be able to communicate using images that they kiss upon surfaces, changing the colors of their lip marks to sort of "pixelate" a larger image. The baby Jiggler that Finn and Jake find does this after becoming sick and exploding. The creature shows them that it wants to go back to its mother. After realizing that the mother lives near Stanley's house, they are able to successfully return it. There is a juice inside of the Jigglers that they need to live, and the mother uses the juice's scent to tell which babies are hers, likely because they can't make their own scent.

The baby Jiggler Finn and Jake encountered is shown grown up in the final montage of "Come Along With Me," and has a suit and briefcase, indicating it has an office job of some kind. Additionally, his casket can be seen among BMO's possessions in the future, with the engraving "T J" and a tiny figure of the Jiggler.

Jigglers look like two spheres joined by a thin middle section. They have many holes on their body, which their noodly arms and legs can move in and out of at will. They are half blackish-gray and half white on all parts of the body. Fully grown Jigglers can grow taller than the height of a house. When angry or fed specific foods, a Jiggler will flare up and rapidly change colors. The Mama Jiggler looks the same as her children, only larger. Finn describes the Jiggler as looking like "two jiggly bellies stuck together."

The Jiggler after eating a grape 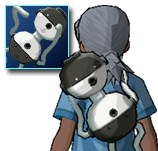 The Jiggler in FusionFall 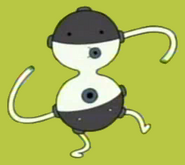 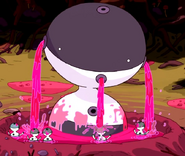