"Jermaine" is the thirty-third episode in the sixth season of Adventure Time. It is the one hundred and eighty-ninth episode overall.[2]

After a chilling dream encounter, Finn & Jake are determined to reconnect with their reclusive brother.[3]

Jake is in a dream, sliding around an infinite Lady Rainicorn with two faces, when he flies into a box that abruptly appears in the sky. Inside, he meets his brother, who's wearing a bear suit and trying to hide a poster. Jake realizes that they must be dreaming at the same time, similar to what happened in the earlier episode "Crystals Have Power." Jake suggests that they should meet up in the "awake world." Jermaine reluctantly agrees and casts a hole dropping Jake through the box, promptly ending his dream.

Jake wakes up and finds Finn working in the kitchen on a strange harpoon machine. Jake suggests they go visit Jermaine, noting how he wouldn't want his own kids to not talk to each other. Finn is preoccupied with the machine, but after the machine malfunctions, ejecting the harpoon, Finn agrees to go and visit Jermaine. As they leave the treehouse, a scan of the landscape reveals a slug pinned down by the metal harpoon.

The two make it to Jermaine's house after being chased by demons demanding they return such odd items as a cup. A crossbow-wielding Jermaine helps them into the house, where Jermaine has built a salt barrier that stops the demons from trespassing. Upon arrival, Finn and Jake cause general chaos, much to Jermaine's dismay, and tells them that he has a responsibility to protect all of their parents' strange and valuable loot that Joshua collected, or stolen, over the years. Jermaine suddenly looks at his watch and runs away into the hallway.

Jermaine heads down a trapdoor, where imprisoned behind a strange blue forcefield is a large blue blob-like monster named Bryce. Jermaine flips a cassette tape in a bear, Booboo Sousa, hooked up to wires in the wall that seems to project the forcefield, and from the conversation it is implied that the ongoing song is what keeps Bryce imprisoned. Bryce threatens to eat Jermaine "from the bottom up," and it is revealed that Bryce is being held prisoner after trying to steal back his poster that Joshua originally stole from Bryce many years ago. Jermaine remarks that he would have let Bryce go with his poster years ago had it not been for all of the psychotic things Bryce says. Bryce attempts to make peace with Jermaine, who rejects this offer based on Bryce's constant threats. Bryce threatens Jermaine again, and Finn and Jake try to consul Jermaine, who's clearly run ragged from his isolated, tape-flipping lifestyle. Jermaine claims he's okay—he's "responsible," and offers to make Finn and Jake fried rice. Jake instead offers to make Jermaine some fried rice, to treat him to a nice meal. The brothers go upstairs and make fried rice as Bryce lamely threatens Jermaine once again. The brother all laugh, but Jermaine signs to himself afterward.

While eating the rice, Jermaine asks Jake what he put in the fried rice, which he greatly enjoys. Jake reveals he used sesame oil and salt that he got from the salt barrier....leaving a tiny gap. This leads to one of the demons crossing the barrier to retrieve its DAT tapes, and the three quickly make plans to destroy it. However their plans go awry, and Jermaine ends up having to suck the demon up with a vacuum. After sucking the demon up the vacuum, Jermaine runs outside where he chucks the vacuum in one of the other demon's face and fixes the salt barrier. Annoyed, the demons taunt "Jermaine the Pain."

After the fight, Jermaine begins to get angry and reveals his jealousy toward Finn and Jake's do-whatever lifestyle, while he has to stay behind and watch his dad's old treasures. Jermaine then proceeds to assault Jake, who calmly reassures Jermaine that Finn and Jake were not Joshua's "favorites," and that Jermaine could have left the house at any time. As Jermaine tosses random objects at Jake, one combusts and sets the house on fire. Jermaine continues to punch Jake, who lets out a fart which causes Jermaine to laugh and see that "he's built his own cage." Finn tries to get the three of them to work together to put the fire out, but Jermaine, who's come to terms with his life, decides it is okay to let the house burn down.

Once the house burns, the scene changes to daytime and the demons are gone. Jake suggests they are probably gone because their stuff was burned up in the fire, giving them no reason to stay to get it back. Jermaine's watch alarm goes off, and he runs over to the trapdoor to find Bryce crawling out clutching his poster. Despite Bryce constantly threatening Jermaine earlier, Jermaine and Bryce seem to be completely normal, continuing their bickering. They walk off together into the woods, with Jermaine nagging at Bryce for being cynical and pessimistic about life. Finn and Jake stare at them from the house ruins as the episode ends. 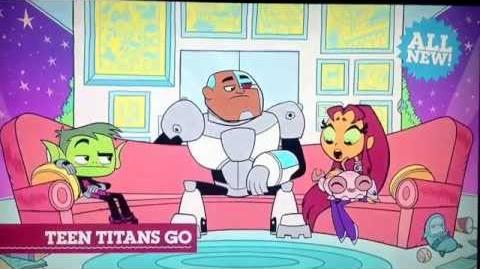 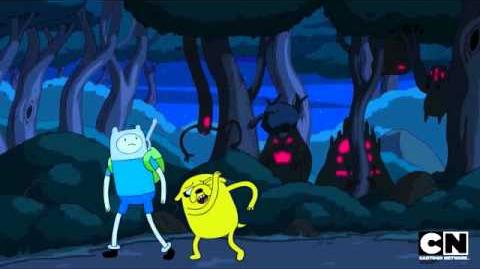 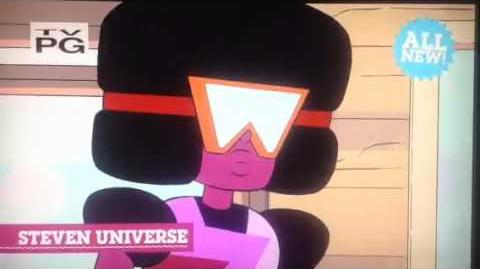 Outside the demon filled forest

The interior of the house

Joshua and Margaret's house destroyed
Add a photo to this gallery 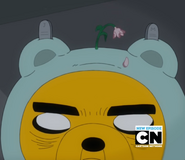 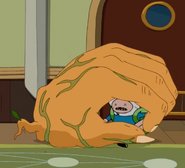 Retrieved from "https://adventuretime.fandom.com/wiki/Jermaine_(episode)?oldid=822962"
Community content is available under CC-BY-SA unless otherwise noted.