Jaden Jeremy Shada (born January 21, 1997, in Boise, Idaho) is an American actor, singer, and rapper. His brothers are Josh Shada and Zack Shada, also voice actors. He voiced Finn on the animated television show Adventure Time. He also voiced the Squirrel in the episode "The Duke," and the Cosmic Owl, but only in "Prisoners of Love." In "To Cut a Woman's Hair," he voices Princess Beautiful.

Jeremy Shada and Zack Shada at the XBOX VIP lounge 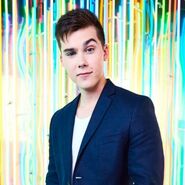 Jeremy Shada with a neon background