The Jellyfish looks just like a regular jellyfish except its skin is opaque while most jellyfish have transparent skin. His whole body is a light-blue color.

This is the first character Princess Bubblegum has killed on-screen. 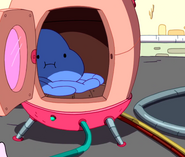 Add a photo to this gallery
Retrieved from "https://adventuretime.fandom.com/wiki/Jellyfish?oldid=851561"
Community content is available under CC-BY-SA unless otherwise noted.