"Fionna and Cake"
Jelly Kinders are Candy People who are thrown on the Candy Castle's ceiling as decorations for the Biennial Gumball Ball. When Fionna asks if they are real, Prince Gumball claims they are not alive and that "they can't even talk," prompting one to babble and flap its arms. Prince Gumball puts his hand over its mouth and nobody seems to notice that it was talking and moving. He then tells Fionna to kick the Jelly Kinders to stick them on the ceiling, which she does. Cake calls them "boogers."

It is unknown if they exist, as they have only appeared in Ice King's fan fiction episode, "Fionna and Cake."

Jelly Kinders come in a variety of colors and are shaped like little men. They appear to be made out of a sticky jelly-like substance. 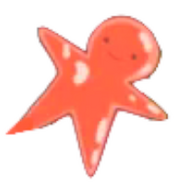