Aleks Sennwald[2]
Hanna K. Nyström[2]
"Jelly Beans Have Power" is the nineteenth episode in the eighth season of Adventure Time. It is the two hundred and forty-fourth episode overall.[1]

Princess Bubblegum’s scientific mind must wrestle with her Elemental magic potential when she’s faced with a Crystal Entity.[1]

As Princess Bubblegum and Slime Princess chat over tea in the Candy Kingdom, PB begins to grow annoyed at her fellow princess, as she incessantly shows off her slime powers as "bestowed" upon her by Patience St. Pim. Slime Princess is grateful for Patience's actions, but PB reminds her that the ice elemental was insane. Though PB pretends not to care about her friend's elemental powers, she makes another attempt to conjure jelly beans from her palm after she leaves, but only manages to produce one.

Later, Peppermint Butler catches PB attempting to chart her powers with science in her lab, and scolds her. As PB is getting ready for bed, a mysterious note bearing the elemental symbol floats through her open bedroom window. After staring at it, she is sent into a dream-like state where she meets Chatsberry, one of the previous incarnations of the candy elemental. He awakens her powers and opens her mind, demonstrating to her the explosive powers of soda.

The next day, PB shows off her own newfound powers to Slime Princess, who believes she is jealous of her own powers, calling her a "hater" after PB calls her slime powers "overrated." PB concedes to Peppermint Butler that she is disappointed in the fact that she has ignored crucial data about herself all her life. They are interrupted by the arrival of a crystalline entity shaped like a giant origami fortune teller, which begins terrorizing the kingdom. PB is cheered on by the candy people as she takes on the entity with her jelly bean powers.

Unfortunately, things take a turn for the worst after PB begins to cause destruction by accident in her efforts to defeat the entity. After seeing the elemental symbol engraved into the middle of the entity, she once again falls into a dream-like hallucination, and encounters Chatsberry. She begs to be taught how to conjure up the explosive soda from her previous dream, but Chatsberry reminds her that he can open the door for her, but she must step through it herself.

Combining her knowledge and skills with science and her elemental powers, PB manages to conjure the mint soda explosion on her own, destroying the crystal entity but also wreaking even more havoc on the kingdom and injuring several candy people. PB orders her Banana Guards to get the wounded into the infirmary before retreating to her lab, distraught. Meanwhile, in the Ice Kingdom, Patience St. Pim examines a diagram with notes on the other three elementals, including PB, Slime Princess, and Flame Princess. 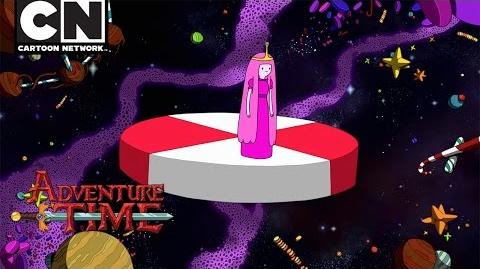 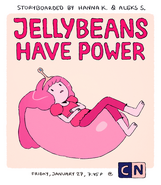 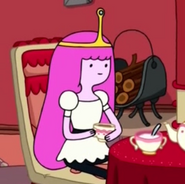 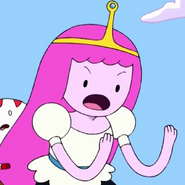 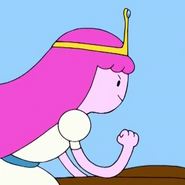 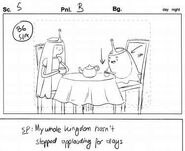 Retrieved from "https://adventuretime.fandom.com/wiki/Jelly_Beans_Have_Power?oldid=822237"
Community content is available under CC-BY-SA unless otherwise noted.