Max Charles (child Jay)
Shyloh Oostwald (child Bonnie)
Dee Bradley Baker (adult Jay)
Mandy Siegfried (adult Bonnie)[1]
Jay & Bonnie Mertens are Finn and Roselinen's children in the Pillow World as seen in "Puhoy." They were raised by their parents and around their grandfather, Quilton, but never met their father's side of the family. They appear to be extremely close to their parents throughout the episode. It is not said if they were real or not, like the rest of pillow world.

They first appear together in the Pillow World. Jay is seen pretending to be the dragon that Finn once slayed many years ago, and Bonnie is seen wearing a hat similar to Finn's, pretending to be him and acting out his role in the slaying of the dragon. They bring him lunch while he is "chopping wool" and run into his arms. When their "grandpillow" Quilton arrives, they run into his arms as well.

After Quilton tells Finn of the door back into the normal world, teenage Jay and Bonnie travel with their father to see the oracle Rasheeta. They travel back with Finn to their house when Finn realizes that he does not want to leave.

As adults they stay by Finn's deathbed, Bonnie crying and Jay looking sad. They tell Finn that they love him. When they say "dad," in Finn's last moments, he thinks they are saying "dead," and he tells them he is "not yet" dead.

Jay and Bonnie are both half human and half Pillow Person. Like their father, Finn, they have short, blonde, human-looking hair. They also both have light pink skin like their mother's, and have black dots for eyes like most other characters in the show. They appear to have thumbs when they grow up, unlike the other Pillow People; this might be because of their half-human heritage. 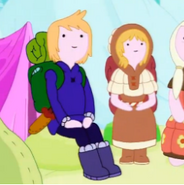 At Finn's deathbed
Add a photo to this gallery

Retrieved from "https://adventuretime.fandom.com/wiki/Jay_%26_Bonnie?oldid=823092"
Community content is available under CC-BY-SA unless otherwise noted.