"James Baxter the Horse" is the nineteenth episode in the fifth season of Adventure Time. It's the one hundred and twenty-third episode overall.

Finn and Jake are inspired by a horse to create their own ultimate feel-good maneuver to cheer anyone up.

The episode starts with BMO opening the door of the Tree Fort and carrying an egg. BMO sings a song about being pregnant (and how an "electrical presence" asked it to "carry the human incarnation of a baby," represented by the egg) as it is walking along. It holds the egg up in the air, but a butterfly accidentally knocks it down and breaks it, making BMO cry. Finn and Jake notice BMO crying, so they try to cheer him up, but are not able to.

While they are thinking about how to cheer BMO up, James Baxter arrives on a beach ball, and whinnies his name continuously, cheering BMO up. Finn and Jake praise the horse, whom they appear to know already, and how he always knows what to do to cheer somebody up. They decide that they should spread the good will by whinnying their names to cheer people up.

Finn and Jake start by whinnying their names near a funeral to cheer the mourners, but this does not work. Recognizing the awkwardness of the situation, Finn suggests they should try to cheer up another person. They arrive at the Candy Kingdom and tries to cheer up a Green Lollipop Girl whose ice-cream has fallen on the ground, but she instead became terrified and runs towards an alleyway. Finn and Jake continue to make noises as they run after her, which makes the girl scream. The two hastily backtrack out of the alley.

The scene changes to Finn and Jake sitting on a hill watching James Baxter entertaining a group of Candy Kids. Finn and Jake contemplate how unique and perfect James Baxter's technique is, and realize that they cannot simply imitate James Baxter -- they have to create their own style to make others feel good.

Back at the Tree Fort, Finn and Jake make noises and dance around, as BMO records their actions with a video camera strapped on its head. BMO asks why it is recording them, and Finn answers that they are attempting to find a style which can be suitable for what they are trying to do. The three of them climb up into the bathtub; and as Jake "scrubs" BMO, Finn analyzes the video and adjust its settings (speeding it up or down) by touching BMO's face. They soon find a portion of the video which causes them to laugh, but Finn suggests if they want to match James Baxter's level of feel-good-making, they have to go deeper.

The scene shifts to a wooded area, by which the three go to Institute of So Und. They arrive inside the entrance and are received by a guide. Finn asks where the studio is to make the best "feel-good" sound, and the guide replies that they have to "think happy thoughts" and follow their heart.

They arrive at a studio full of speakers and electronic equipment. The three scope the room, and discover how they could use this equipment to "force happiness into the listener." After several tests and adjustments to how the sound was generated, Finn and Jake realize that what they were missing were "feel-good" body actions, and once they get hold of this realization, the three of them sleep, exhausted from the ordeal.

Finn and Jake come back to the Candy Kingdom to see the same Lollipop Girl crying, this time because of a fallen drink cup. The girl notices them and remembers the past encounter, then screams, but Jake tells her to quiet down and see their new demonstration, which includes Jake turning into a trumpet and a beach ball that Finn balances on James Baxter-style. Afterwards, the girl laughs loudly, and the two know that their gimmick has worked.

Finn and Jake continue making other people happy (including four Grass People, a ghost, and more Grass People at a meeting) until they see the same mourners in the funeral they encountered yesterday. Finn apologizes for their behavior the previous day, and entertains them, making them happy.

Suddenly, the coffin opens and the dead person's skeleton pops out, rolling in the ground. The mourners and Jake run away, terrified, while Finn battles the skeleton. The skeleton's ghost appears and moans why they are interrupting his "deal" as Finn asks Jake for some help. Jake (who's shrunken down) appears inside of a flower and stretches, but is thrown back when the ghost spits onto them. The ghost throws a big chunk of land at them, which they dodge. Jake protects Finn from the attacks, but the ghost punches them down into the ground.

Finn tells a scathed Jake that he will block the next attack, but Jake realizes they may die and performs a rhythmic clap, telling Finn that he should listen for the sound for they might be separated in the 9th Dead World. Suddenly, James Baxter appears, calming the ghost just as he has almost beaten the duo to death. The ghost carries Finn and Jake out of the hole and puts them softly onto the ground, and asks them if they know this guy. They reply that they know him, and explain his "deal" about making people happy to the ghost, who deems this "cool." Meanwhile, the horse realizes night is coming and deflates his beach ball, folds it into a triangular hat, and trots off into the sunset as the episode ends. 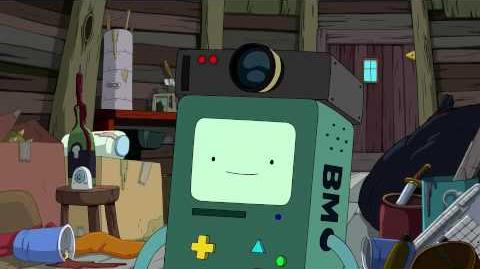 BMO singing to its egg

"James Baxter is so good, man!"

"Let's do his thing and spread the good will!"

Finn and Jake scaring the girl

Girl screaming and running away

James Baxter is cheering everybody up today!

"Why am I recording?" And snail inside a bucket 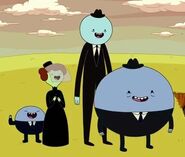 People at a funeral

James cheering up the undead