James Baxter
James Baxter is a horse who travels around the Land of Ooo, cheering people up by balancing himself on a beach ball, is loved by the community, respected by Finn and Jake, and usually will be whinnying his own name, "James Baxter." He is voiced by, and named after the animator James Baxter. He seems to come out immediately after someone becomes lonely, depressed, or starts crying. When James Baxter is done for the day, he deflates his beach ball, folds it into a hat, places it on top of his head, and trots away.

In "Horse and Ball," James Baxter is traumatized when his beach ball pops after encountering an exploding mole person. As he recuperates at the Tree Fort, he flashes back to how he was once a sad workhorse in a bustling horse-metropolis filled with work-obsessed horses. When he encountered a cave full of pre-Mushroom War garbage, he began balancing on a beach ball to cheer up a sad bat that lived there, and gained his name after mis-reading signs reading "Games" and "Bookstore." Back in the present, Finn tries to get through to James Baxter by telling him how he's a unique and special horse that makes people happy, and to let go of what he's lost and make himself happy for a change. When Jake and BMO return with an array of beach balls, James Baxter declines their offer, and instead goes outside to perform some elaborate dance moves with no audience but himself, his joy in performing restored.

James Baxter is a tall Palomino horse with yellow-orange fur. His hooves are a typical brown color. Similar to most characters in the show, he has a simple face consisting of dot eyes and a basic mouth. He has small ears of matching fur color that are pointy and naturally stretching upwards. His mane is a bleach-blonde color and reaches mid-length on his back. His tail is the same color as his mane, and is average in length. In every scene of his appearance, he is seen with a striped light blue, yellow, and orange beachball, which he travels on. At the end of the episode, he is seen folding the beachball into a triangular origami hat. In this scene, he is shown in a pink and purple color scheme, which is likely due to the sunset.

The title card for "James Baxter the Horse"

The title card for "Horse and Ball" 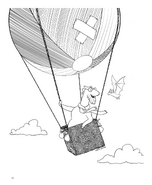 Artwork by James Baxter from the 2018 AT crew zine