"James" is the forty-second episode in the fifth season of Adventure Time. It's the one hundred and forty-sixth episode overall.

The scene opens with Finn looking for Jake and finds him in a storage room. He asks Jake if he is still thinking about James then says Princess Bubblegum is waiting for them. Jake says that he isn't ready but Finn suggests he should just play it off with a normal face. Jake tries to, but ends up crying with Finn. They go out to the balcony where Princess Bubblegum announces she will begin the ceremony.

Then the episode flashes back to a week before, where Finn, Jake, Princess Bubblegum and James are heading towards a pit in the Desert of Wonder, on a mission to collect samples to see if the area can be colonized. Jake is bummed since he wanted to explore all the great sights they were passing, so when PB asks James about the fuel, he says they have enough to go sight-seeing after they finish collecting samples, to Finn and Jake's delight. When they arrive at the pit, James reports high levels of radiation and suggests that everyone puts on their radiation suits. After landing, PB tells them to collect any surface samples they can. She then picks up a rock which uncovers a hole filled with goo. She picks up a nearby stick and pokes the goo, revealing it to belong to one of the goo monsters from "Simon and Marcy," who appear to have buried themselves.

Princess Bubblegum, Finn, Jake, and James all rush back into their mode of transportation for safety. The Goo Monsters trap them inside the ship by breaking off its legs and crowding around the sides. PB asks Finn if he can think of a plan for escape he suggest they radio for help. After she explains that the radio is broken James offers to fix it with help from his "lucky coin." Jake exclaims that James isn't helping but PB assures him that James is very resourceful. While James is fixing the radio, Finn, Jake, and PB head to the inventory room. Jake finds a box of flares right before James notifies the three that he fixed the radio. PB goes to check on the radio and tells that it's still not working. Finn checks the radio's inside and finds that its wires have been cut but James says that it was working a while ago and tested it himself. Finn tells James to pass him the flares, but when he opens the container, the flares are gone. Distraught, Jake tells Finn and PB to talk to him in the other room. Jake claims that James is a saboteur but PB denies it before finding that James is with them, asking what they were talking about. Finn gets an idea and gets PB and James to make a diversion while he and Jake look for a safe path out the place. Out of nowhere, somebody fires the missing flares which attracts the monsters towards their ship. Jake is terrified, mentioning Lady Rainicorn and their five kids thinking he'd outlive at least one of them. James hands his lucky coin to Jake to help him calm down. Finn asked James if he shot the flares but PB says that they don't have time to blame each other. Finn tells his last plan, to distract the monsters while the others run to safety but PB knocks Finn and Jake out with a wrench. Finn wakes up for a while, seeing James hand over a part of himself to PB then falls unconscious again. He wakes up again to see Jake and himself being carried by PB to safety while James distracts the monsters shortly before being devoured. After they got away, PB explains to Finn that she was the one who sabotaged their escaped plans. She explains she calculated every chance of escape plans they had and none of them were going to work so she had James do Finn's last escape plan. Saddened, Finn asked why PB didn't let him. PB explained that she could clone another James using the candy part from James, but couldn't clone Finn.

Back to the present, PB tells the candy citizens of James's heroism and honors him with the new James she made then gives him an award for bravery. Finn is unsure whether it was right or wrong before Jake gives the new James the lucky coin.

The scene goes to the pit, where the original James, now zombified, is seen climbing up and is seemingly leading the goo monsters out of the hole. 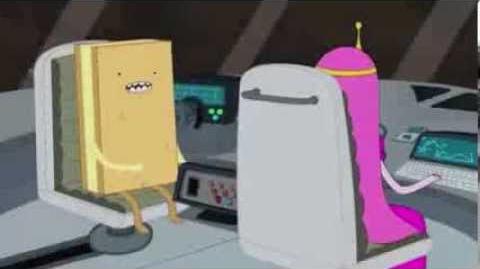 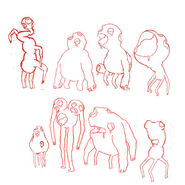 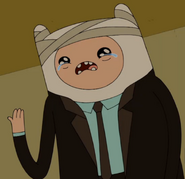 "I take it back. This guy is totally cuckoo!" 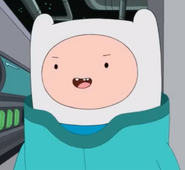 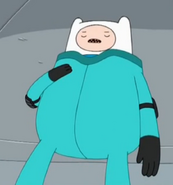 The new James being awarded the Medal of Honor