Kent Osborne [2]
"Jake The Brick" is the twentieth episode in the sixth season of Adventure Time. It is the one hundred and seventy-sixth episode overall.

The episode starts with Finn leaving the Tree Fort with an apple given to him by BMO. BMO bids Finn goodbye, as he goes to somewhere following a map. He wanders through a forest and climbs up a hill. He then proceeds to sit on the hill and eat the apple he brought. After eating the apple, he tried to throw it inside an empty tree stump, but misses his aim. He shrugs and leaves it, and then continues further through a dry grassland.

Finn soon reaches a dilapidated brick house. He goes nearer, and sees that Jake is acting as a brick. He is sitting in one of the house's brick compartment cells. He greets Jake, who also greets him and laughs, as Finn found his map which lead to this house. Finn asks Jake how his experiment is going, to which he says that its going well. Finn asks if he wants come home, but Jake says he wants to stay as a brick for a little while longer. Finn asks what his purpose is to stay as a brick, and Jake explains that since he was a little infant, he always wanted to feel what it was like to be a brick when an old brick shack fell down.

Finn says its cool with him, but leaves a walkie-talkie just in case they needed to communicate. Jake protests at this idea, but he later on accepts it, as Finn says BMO is worried about him. Soon, Finn leaves Jake and he goes back to being a brick. Soon, he becomes bored and the day eventually passes marking the arrival of night. Soon, Jake notices the bushes near him rustling, and a bunny comes out. The bunny starts to dig, as Jake gives background commentary about the bunny, saying it likes to dig. Jake further says it must be a carrot that it was looking for, which has grown when a stray seed was dropped by a bird. It is shown that Finn has kept the walkie-talkie on all the time, because as Jake talks about the bunny, Finn and BMO are hearing it. Soon, a deer comes out of the bushes as Jake further continues to commentate on his surroundings.

Finn then greets Jake through the walkie-talkie and says he can hear what he says. Jake gets upset because he didn't know the walkie-talkie was on. Finn states that he left it there so it will surely be on. BMO greets Jake who greets him back. Finn then asks Jake what has happened to the bunny, to which Jake replies he doesn't want to tell them as its a part of his experiment. Finn and BMO apologize as they had intervened in his experiment, and decide to leave him alone.

Jake calls to the walkie-talkie to make sure Finn and BMO are out of this. After he made sure, he notices the bunny, who has retreated to his shelter and tries to rest, despite he couldn't eat anything. Soon, twilight falls on the forest. Jake gives a talk about two crickets, who are rehearsing their rhapsodies. Soon, in the distance, flashes of lightning appear, predicting the arrival of rain.

The deer also got tired and retreated to the bush for the night's rest. Soon, Jake also falls asleep.

Jake wakes up to heavy rain with lightning and thunder sound. He gets happy as his shack will fall down soon and he will fulfill his dreams. He notices the bunny, who is bravely trying to stop the water, which Jake encourages. It is revealed that Finn didn't turn off the walkie-talkie at all. He is instead with Starchie at a radio tower, broadcasting Jake's story to everyone in Ooo.

Tree Trunks and Mr. Pig, along with their adopted son, the infant Lich, are listening to it as Jake says that the bunny has no friends to rely on to get shelter and help. Even the Candy Orphanage and the shady area of Candy Kingdom listening to it.

As Jake continues to speak about the bunny, he says that it won't be long till the bunny's home fills with water, much to the disappointment to the listeners. But suddenly, out of nowhere, some group of beavers arrive, who help the bunny by building a dam near his house so that the water doesn't come in, while the other beavers are providing him shelter from rain.

In the radio tower, Finn asks Starchie to boost the frequency so everyone can hear about this, writing it in a paper so Jake doesn't hear him. Starchie obliges, and Finn tries to crumble the paper and throw it to the bin, but misses his aim again.

Soon, the voice of the beaver's smacking on ground is heard everywhere. Jake further says that this endangered house of bunny will soon be protected, and safe for him to live in. An unexpected visitor, a sea lard appears to the bunny, as Jake says they only come in mud scamps. The notable listeners, Banana Man, Colonel Candy Corn, Lady Rainicorn and T.V., Abracadaniel, Marceline, Lumpy Space Princess (asleep) and Turtle Princess (also asleep) are listening to it as Jake further says that the sea lard is expanding the home of the poor bunny.

Even Ice King is listening to it curiously. Jake keeps on saying that the sea lard and beaver are team working to help the poor bunny, as more listeners are shown such as Flame Princess and Cinnamon Bun, Rattleballs, Lemonhope, Betty Grof and Jameses. The beaver's constant smacking causes Finn and Starchie to sleep away.

Soon, the next morning, Jake says that the rain has passed and the beavers have finished their work and built a dam to prevent water form entering the house of the bunny. The sea lard also leaves. The bunny sleeps, exhausted after a terrible night. But suddenly, the bush starts to rustle and the deer comes again, waking up the slumbering listeners. The entire Candy Kingdom listens as Jake says the deer starts to destroy the safe haven of the bunny ruthlessly, with everyone's disappointment.

But, much to Jake's surprise, the bunny is not upset at all, as he finds a home in a hollow tree trunk which fell on the ground. Even the deer is impressed by it. He gets confused by it and retreats back into the forest, as everyone become happy. Everyone in Ooo cheers as the bunny gets a new home. Jake thinks that being a brick is useless, as a bunny can teach him more. He leaves the shack, but as soon as he leaves, the shack falls down. Finn calls to Jake from the walkie-talkie after the shack fell. Jake responds to him as Finn asks if he will come home. Jake agrees to it, happy by his experiment.

The episode ends with Finn throwing the walkie-talkie correctly inside the trash bin and happy that he threw it correctly. 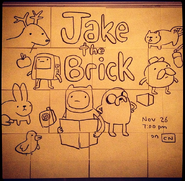