Kristen Schaal
Jake Jr. is a pup and second sibling of Jake and Lady Rainicorn's five children. She pretends to be kidnapped in "One Last Job" only for Jake to find out that she was the kidnapper all along. In "Another Five More Short Graybles," she watches Finn and Jake construct a make-believe time machine.

Jake Jr.'s face consists of several small lumps and a star-shaped mouth. Her blonde hair is put into a large up-do ponytail, and she has pastel colors (blue, pink, yellow and teal) running vertically around her whole body. Her horn is located on her rear, where the tail should be. Unlike her siblings' white horns, it is the same color as her hair.

Like her siblings, Jake Jr. has the ability to teleport from one place to another.

She can also shape-shift using her hair, similar to her father. Unlike her father she can use this power to form a propeller allowing her to fly.

She can transform into super pup along with her sisters and brothers, becoming the head of the super pup.

She can also play the guitar well, as shown in "Ocarina."

Jake Jr. seems to be the favorite of her dad's pups, as they've been seen interacting with each other the most. In "One Last Job," Jake chooses to save her, even if it means reforming the gang he chose to leave behind and stealing one of the most precious artifacts of the Candy Kingdom. In "Another Five More Short Graybles," Jake tries to cheer her up about the future by inventing a time machine with Finn.

Jake Jr.'s relationship with Jake seems more strained in "Ocarina," where she pointed out to Viola that Jake hadn't seen the pups in a while. It is suggested in that episode that the pups' rapid aging has made them more mature than Jake, and that several of them (with the exception of Viola) are irate that he has not spent much time with them as adults and acts like a child himself.

It's possible that Jake Jr. is friends with Tree Trunks, as Mr. Pig described Jake Jr. as one of the people she cares about in "Apple Wedding."

Jake Jr. in the promo art of "Jake the Dad" 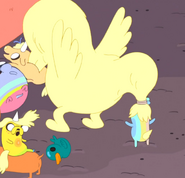 Jake Jr. (to the far right) and her siblings

Jake Jr. playing with a sword 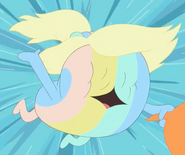