Jake's phones are devices he uses to communicate with fellow denizens of Ooo. He has been shown to own three phones.

The original phone is a walkie-talkie with a headset, powered by batteries taped to the back of the phone and connected to two wires. Presumably, it was made by Jake. There is also a number pad to dial phone numbers, as well as up and down arrows to scroll through his contact list. So far, it has only appeared in five episodes:

His third phone seems to be also a flip phone, similar to Jake's video phone. This phone makes an appearance in "Pajama Wars," where Jake uses it to contact Finn to know about his 'walk' with Princess Bubblegum during the sleepover party.

Jake is known to have 28 contacts on his old phone: 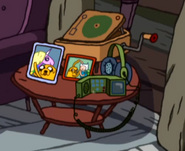