Jake has been seen with a blue pack, which first appeared in "The Other Tarts" and again in "Dad's Dungeon" and "Incendium". Jake usually carries it when he adventures alone or when Finn cannot take his own backpack, for example when he was carrying tarts for the Back-Rubbing Ceremony. In "Incendium," Jake's pack contained a potato, a piece of paper, a copy of Ble, a cup, and a water bottle. In "Dungeon Train," Jake uses it to store the loot he gets from the monsters Finn defeats.

It is blue and is more detailed than Finn's pack, having a pocket on the front. 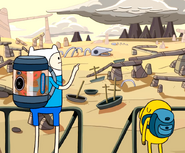 Jake's pack in "The Other Tarts"

Jake about to take out a water bottle from his pack in "Incendium"
Español
Community content is available under CC-BY-SA unless otherwise noted.
Advertisement