Jake's Favorite Cup is an object that appears in multiple episodes of the show.

It is a white cup with a flower made of thin lines. The top is smooth, the bottom is bumpy, and there is a handle on the side.

Jake drinking out of the cup in it's debut episode, The Jiggler. 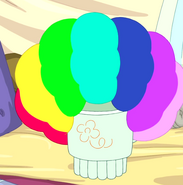 The cup with a rainbow Afro on it, as seen in Puhoy. 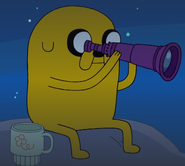 Jake with the cup full of hot cocoa, as seen in The Mountain.

Jake hiding in the cup, as seen in The More You Moe, The Moe You Know (Part I).

Jake drinking out of the cup, as seen in King's Ransom.

Jake holding the cup, as seen in Abstract. 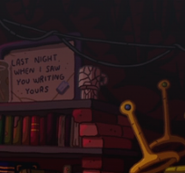 The cup, glued back together after the Tree Fort was destroyed in the episode Come Along With Me.
Community content is available under CC-BY-SA unless otherwise noted.
Advertisement