Don't miss the beginning of the new arc of this totally rhombus series! The totally sick gang of Finn, Jake, Marceline, Princess Bubblegum, and the Ice King are back in this new arc of the incredibly popular all-ages series! You won't want to miss this ultra-awesome issue that kicks off a brand-new storyline! Featuring a back-up story by Paul Pope!

The comic starts with BMO making a cupcake, which he calls "baking." BMO then calls for Finn and Jake to tell them that he had made a cupcake. Finn and Jake then rush to BMO, where they both end up getting stuck in a door. They both then argue over who gets the cupcake, but BMO tells them he made it for them to share. Jake then says that the cupcake is too small to share, so Finn comes up with the idea to have BMO give them a challenge, and the one who wins gets the cupcake.

Later, Finn and Jake are in a sprinting position, when BMO says, "On your mark! Get set!" Finn interrupts and says that BMO hasn't said what the challenge is yet, so BMO explains that the challenge is who can go the furthest in a straight line. A whistle appears on BMO's face and blows, then BMO tells Finn and Jake that was the whistle, and the two begin to run. BMO then wishes them luck and says that he finally has time to continue building its Finn and Jake Robots.

As the pair run, they compliment each other, but then tell each other how they are going to lose. Finn and Jake get tired and decide to walk instead of running. BMO is shown working on the Finn robot, then saying "That's not creepy enough!" Finn and Jake start arguing about who will give up first, but then Jake finds a brick wall in front of him. Finn celebrates about getting the cupcake, but Jake uses his powers to stretch over the wall. Finn says that Jake was lucky that the wall didn't go "infinity high."

Finn and Jake then come across Lamprey Princess stuck in a clay bucket. Finn tries to break it, but it was too far for him to reach, meaning he would have to step out of his line. Finn then uses his auto-tune to shatter the pot by hitting the right frequency. Finn says that he likes it better when he is working together with Jake, then Jake says that there's not a force that can stop "two teamed-up dudes."

It then shows Finn and Jake traveling across the land of Ooo, then walking across a pit full of Monsters where they are glad it wasn't in their path. Jake stretches himself to be a hang glider so he and Finn can fly. Finn then says that they should do this more often. The pair then come across a sign that says "NONE SHALL PASS." Finn then notices that it also says, unless you you can think of a bunch of things that rhyme with "butt." Finn says, "Gut!" and "Say what!" Jake says, "Strut!" and Peanut!" The sign thanks them and says that it will help him with his poetry writer's block.

Finn and Jake then find a tree fort similar to theirs and they knock. The person who answers says that his name is Adventure Tim. He introduces them to ALN, his computer friend. Finn and Jake introduce themselves, then ALN says that he would ask them if they wanted a cupcake, but Tim ate the whole thing. Finn asks Tim what he does, and he says that he fights evil and saves princesses from the Mice King. Jake asks what princesses he saves and Tim says he saves tons, like Princess Chewypaste, Irregular Topography Expanse Princess, and Lunchbox Princess. Jake then gets angry because he thinks that those are all knock-offs of their princesses and the Mice King being a copy of the Ice King. The Mice King then appears and attacks them, but is defeated by Finn, Jake, and Adventure Tim.

Afterward, they return home, but BMO says that none of them won the cupcake. Finn and Jake ask how BMO knew and BMO says that he watched them through the telescope. Then they say that he must have seen the Mice King and Adventure Tim, but BMO said that he got bored and took a nap. Finn, Jake, and BMO then share the cupcake. Jake then says its weird that Adventure Tim is having slightly different adventures then they are, so Finn says they change Tim's adventures by what they do. Jake then puts his cheeks together and blows a raspberry, and Tim does so while on his date with Lady Unibow.

"Emit Erutnevda" is a comic by Paul Pope. It also appears in "Sugary Shorts" Volume 1.[4]

Finn is lying on a field when Jake arrives carrying what appears to be a mirror. Jake tells Finn that it is actually a portal. Finn pokes his head through the portal and sees a marching band. Jake then pokes his head and sees his alternate self-playing cards with other dogs. Alternate Jake is shown to have won the card game. Finn then suggests that they poke their heads into the portal at the same time. Finn and Jake are teleported to a mobius strip. Finn then questions the randomness of events and asks if an outside force is changing the events. A giant spider-like robot then appears behind Finn and Jake and the robot pronounces the value of pi.

"Ice Kingdumb" is a comic by Georgia and Chris Roberson which also appears in "Sugary Shorts" Volume 1.[4]

Ice King says to Gunter that he is tired of being rejected by princesses. He then realizes that since he is a king, he needs a queen instead. Ice King confronts Marceline and demands that she marry him. Marceline shape-shifts into a giant bat and scares the Ice King away. Ice King then proclaims that he will stick to princesses instead because queens are scary.

Cover A by Chris Houghton

Cover B by Eleanor Davis 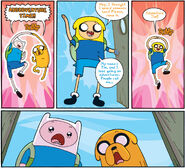 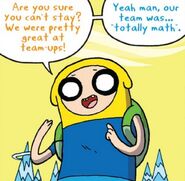 Panel where Adventure Tim is missing a sleeve.