Algebraic! Don't miss Finn, Jake, and all of their friends on their biggest adventure yet! Trapped by the dreaded Lich, the guys gotta stop all of Ooo from being sucked away forever - and rescue a bunch of wayward Princesses. Luckily, no one does adventure - and looks cooler doing it - than Finn and Jake! The Cartoon Network sensation's brand new comic is the hot new series you can't afford to miss! Also includes "BACON FIELDS" and "THE RIDE OF SIR SLICER!"

Just as the Lich sucks up the entire Earth into the Bag of Holding, Finn and Jake emerge from the hole they made in the bottom of the bag and attack the Lich in space. However, Finn and Jake aren't able to do much before being sucked back into the bag. Jake shape-shifts into a jet and attempts to attack the Lich before being sucked back to the bag. Finn then proposed that they form groups. Jake was paired with Ice King, Finn with LSP, and PB with Desert Princess and Marceline. They all fail and are sucked back to the bag.

Finn then proposed that Desert Princess creates sand clones of Finn and Jake, and Ice King should do the same with snow. Finn then orders PB to command the clone army while LSP tells the clones the reason they are going to beat up the Lich, and Marceline will fight alongside Finn. Finn and Marceline then go out of the bag and insult the Lich while the sand and snowclones mob the Lich. Jake then comes out and rips the bag, releasing Earth while flinging the Lich towards the sun. As Finn and Marcy celebrate, they are shocked to see that Ooo is missing.

The Ride of Sir Slicer

"The Ride of Sir Slicer" is a one-page backup story by Zac Gorman, which also appears in "Sugary Shorts" Volume 1.[1] It shows Sir Slicer going on a journey to find and make fun of Finn.

In "The Ride of Sir Slicer"

Cover A by Chris Houghton

Cover B by Elena Barbarich 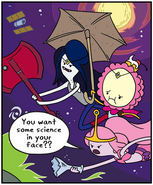