watch 03:27
Wiki Targeted (Entertainment)
Do you like this video?
Play Sound

Issue 21 of the Adventure Time comics.

"It's another crazy adventure with our favorite heroes of Ooo. Join Finn and Jake as they protect their friends from the Ice King...who isn't really a bad guy...he's just kind of sad sometimes. But that's okay because Finn and Jake aren't sad, and that's what makes them our heroes! Jump into fantastical world, with adventures, lessons, and sometimes princess farts."[1]

Finn and Jake are taking a day off from adventuring and Finn shows Jake a stand he built for his root sword. As they laze around, they notice gum arising from the the floorboards which attacks them.

At the Tree Fort, Jake is messing with the Gum until he notices it's trying to force its way down his throat, so he grabs Finn and BMO and carries them to the roof.

In the Candy Kingdom, the Gum is erupting through the floors of Princess Bubblegum's room. Peppermint Butler attempts to fend it off, but gets engulfed by it.

At the Tree Fort, Finn, Jake and BMO are forced to leave the Tree Fort as the Gum overtakes it, complaining that their home is constantly damaged by evil-doers. They run away as the Gum follows them.

Back at the Candy Kingdom, Princess Bubblegum has the Banana Guards lock the castle doors and uses a experimental fire extinguisher to cover the room in five layers of jawbreaker candy and calls Finn and Jake to gloat that she's taken care of the problem.

Finn and Jake have outrun the Gum and are close to the Candy Kingdom when BMO alerts them to a call from the Princess who quickly brags about her victory over the Gum before hanging up. Finn and Jake are offended of how fast the call was and how quickly she hung up before they had the chance to congratulate her until BMO points out it's a recording. It turns out Princess Bubblegum made the call thirty-six hours ago, but Finn and Jake were still in bed at the time and just told BMO to set alarm to remind them later.

Finn and Jake go to look at the Candy Kingdom and it's covered by the Gum. 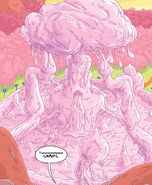 Retrieved from "https://adventuretime.fandom.com/wiki/Issue_21?oldid=854556"
Community content is available under CC-BY-SA unless otherwise noted.