Jesse Moynihan [2]
"Is That You?" is the nineteenth episode in the sixth season of Adventure Time. It's the one hundred and seventy-fifth episode overall.

A memorial service for Prismo turns into a resurrecting adventure for Finn and Jake in another dimension.

The episode begins with Finn and Jake doing a memorial service for Prismo by dancing around a small table with a jar of the last of Prismo's pickles. Jake starts to cry as he is about to devour the last of the pickles. Finn says they can put it again in the fridge, but Jake says the pickles were meant to be devoured. He and Finn perform the dream ritual and Jake eats the pickle. A huge light explodes, so they go to their beds and Finn and Jake dream of Prismo.

The next day, Finn wakes up screaming from his dream. He finds that Jake is already up. He sees Jake is outside and pretending to dig up Everything burrito. He asks Jake why is he pretending to do so, and Jake is startled to see Finn. He comes down to see Jake, but Jake suddenly explodes. When Finn reaches outside, he doesn't find Jake. He then sees Jake talking to nothing, re-enacting the moment where he danced with the dancing bug. Finn speaks to Jake, but as soon as Jake notices Finn, he explodes, much to the shock of Finn. Finn thinks he is still sleeping and slaps himself. He realizes he isn't dreaming, and sees Jake inside the Tree Fort. When he sees Jake, he is again acting his previous memories and Finn says he already did those things. As soon as Jake notices Finn again, he explodes.

Again, Jake is heard singing the song Bacon Pancakes, flipping an imaginary pancake. Finn feels that something is wrong with Jake. The scene changes to another dimension where the real Jake is. He is confused where he is. Soon, he sees Prismo, who is talking about getting Jake his pickles for his birthday. Prismo starts to go away, and Jake sees he didn't noticed him and starts to follow him up. He gets confused, as he is alive, saying he and Finn saw his Old Man body destroyed by Lich. He gets to the end of the tunnel, where the re-enactment from Wake Up occurs, where Prismo is killed. Soon the area where he was in changes to another long path.

Finn is seen in his Tree Fort bored of Jake acting up his old memories and when he notices Jake talking to him, Jake explodes again. He then comes to the conclusion that Jake's memories are re-manifesting themselves and when Finn acts out of order in his memory, he explodes. He then finds that something must have happened when they went to sleep. Soon, Jake's last night memory comes and Finn acts accordingly.

The scene changes to Jake, who is seen passing through the path to the end, where there is a door. While he was going in there, he could see his old memories with Prismo surrounding him. He passes through the tunnel, and discovers at the end that there is a bed. The bed is a Permanent Opposing Industrial Strength Magnetic Bed. He also notices a bunch of other luxurious and extremely rare things like the bed's blanket, pillows etc. He then thinks that this is a trap, and then says that whoever made this trap has accomplished and Jake sleeps on it. Soon, Prismo appears in the wall behind Jake.

The scene changes to Finn acting the last night's ritual. When Finn finishes his acting and goes to bed again, he sees that as soon as Jake slept, Prismo's pickle jar began to glow and Jake got inside it. Soon, Finn follows Jake to the other dimension.

He hears Jake's voice in that dimension, and follows his voice. He then sees Jake running in the tunnel before. Finn follows him, but Prismo stops his peeking through a hole. Finn is startled when Prismo is seen alive, and Prismo explains he is technically still dead, but put up a Plan B in case he ever died. He says he is talking in the past, but now he can see Finn. He also explains that since Jake and he have made a Bro-bond, he can bring Prismo back to life.

Soon, Finn follows Prismo and another Jake again runs through that tunnel, which Prismo peeks to check on him. Prismo explains he has to wake up Jake and see what will happen. Finn gets confused, so Prismo says that he didn't think this plan all the way through. Soon, the Prismo near Jake apologizes to Jake that he died, with the real Finn and Prismo peeking on them. He tells him to wake Jake up, which he does. He goes near Jake and the other Prismo says that his past self must be doing plan B. Soon, Finn wakes up Jake, but he doesn't want to wake up, since his sleep was very deep. But as soon as Finn pulled him away from the bed, Jake became normal.

They both go to the real Prismo, and the other Jake soon arrives at the same bed. Jake is startled to see Prismo alive and extremely happy too. Prismo then tells Finn to stop his other self who is going to wake up the other Jake. But Finn gets confused. Soon a voice is heard and he tells them to hide. The other Prismo and Finn arrive to wake the other Jake. Finn gets totally confused, but gets his mind cleared when Prismo says he has to stop his 'that' who. Prismo then explains that one of Jake's alternate reality will sleep for eternity to keep Prismo alive, to which Jake accepts. 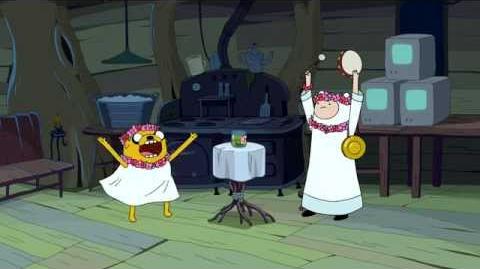 Adventure Time - Is That You? (Sneak Peek)
Sneak Peek

Adventure Time - Is that You? (Preview) Clip 1

Adventure Time - Is that You? (Preview) Clip 2

Adventure Time - Is that You? (Preview) Clip 3 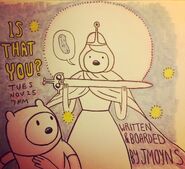