"Incendium" is the twenty-sixth episode in the third season of Adventure Time. It is the seventy-eighth episode overall.

After Finn is rejected by Princess Bubblegum again, Jake searches for another girl for him, eventually journeying to the court of the Fire Kingdom to win its princess.

The episode opens with Princess Bubblegum showing Finn and Jake her liquid pyrotechnics. After she draws Jake onto her lap, Finn makes an attempt to put his head on her lap as well, but she pushes him away, saying, "Come on, Finn, don't be weird."

Finn becomes heart-broken and, after Princess Bubblegum leaves and the resulting rainstorm comes and passes, he curls up in a corner with a piece of Princess Bubblegum's hair and two pictures of her. He then sings "All Gummed Up Inside" to express his misery and starts moaning in pain knowing that it is hopeless to win Princess Bubblegum's heart, leaving Jake and BMO feeling sorry for him.

In an attempt to cheer him up, Jake seeks a new love interest for Finn, leaving BMO to watch over him. While walking, Jake hears what sounds like a girl's scream and stumbles across Flambo, who is being attacked by Iron Owls. After saving him, Jake asks Flambo if he knows any princesses Finn's age. Flambo then tells him about a "hot" Princess in the Fire Kingdom. When they get there, Flambo casts a "Flame Shield" on Jake so it will be safe for him to go in. Jake then checks on Finn, who is desperately trying not to cry. Jake goes into the castle and introduces himself as the "Baron of the Grasslands" to the Flame King, and then attempts to win over the Flame Princess for "Prince" Finn. First, he offers a water bottle which he accidentally kills the Flame Jester with. Flame King states that he hated his jester. Jake's second attempt is to sing "All Warmed Up Inside" as a serenade. Flame King is not impressed with the song and demands that Jake leaves. Jake then checks on Finn with BMO's camera, as he sadly apologizes for failing to win the Flame King's favor. Finn is now bawling and tells BMO to go away. BMO's hands are shown in an arrow pointed toward Finn's open pants while BMO walks towards Finn, while repeatedly saying "Boop, Boop, Boop." The view switches to Jake looking weirded out and Finn is heard yelling in pain/surprise. The Flame King demands to know why Finn is not here, so Jake stretches his stomach to look like Finn, who greets the Flame King and offers him a koala bear (made with Jake's stretchy powers). Though koalas are the Flame King's favorite animal, he rejects the gift, saying he no longer likes koala bears. Fake Finn begins to cry and Jake tries to cheer him up, but he loses control of fake Finn who begins to attack him and (seemingly) kill him. This impresses the Flame King who states that a prince who is willing to kill his own buffoon is welcome to date his evil, destructive daughter, much to Jake's horror.

Flame Princess walks over to the Finn-shaped-Jake and embraces him. Some fire elementals and Jake remark that she actually seems normal and Flame Princess responds by shooting fire at them and turning them into flambits. Upon observing this, Jake concludes that she is an evil princess. Jake makes his Finn say that he does not like her anymore. Flame Princess is enraged, causing mass chaos with her destructive fire powers. Jake attempts to flee to the tree house, but she follows him in her flaming, monstrous form and sets the tree house aflame. Jake tries to warn Finn, but Finn does not notice or care because of his depression over Princess Bubblegum.

The rain resulting from the liquid pyrotechnics hits Flame Princess, dousing out her flames. This reduces her to her normal girl form, which surprises Finn. She passes out and falls. Using Princess Bubblegum's lock of hair as a support, Finn catches her in his arms. Flame Princess wakes up then asks Finn angrily why he does not like her. Finn immediately replies that he does like her causing Flame Princess to blush. A moment later Flame Princess becomes angry again and warns Finn to not mess with her and slaps him in the face and storms away. Finn watches the fire trail she leaves behind and murmurs to Jake that he thinks he has a crush (on Flame Princess). 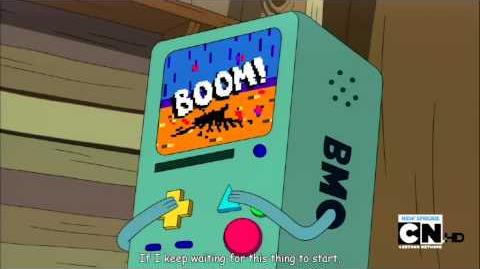 Adventure Time-All Gummed Up Inside 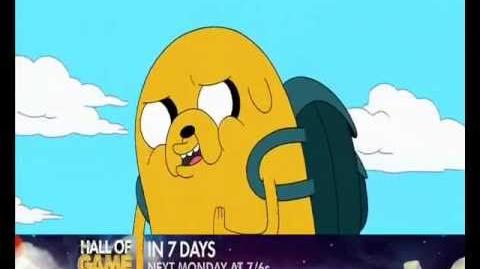 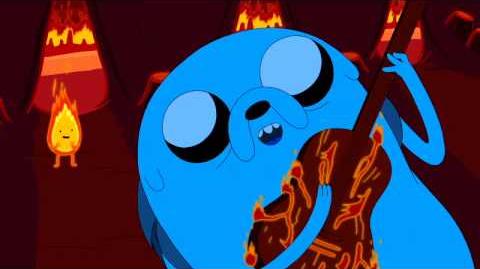 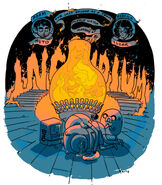 Jake with a fire guitar

Princess Bubblegum, Jake, and Finn's hangout at the beginning of the episode 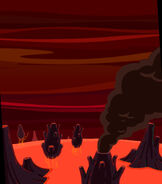 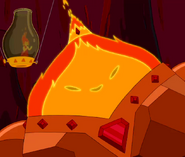 "Don't ever mess with me again."

Finn and Jake after the effects of Flame Princess. (presented in its original CinemaScope master release)