"In Your Footsteps" is the seventh episode in season four of Adventure Time.

A bear befriends Finn and Jake, but what are his true intentions?[1]

Finn is skydiving in the air with Jake in his backpack. Finn pulls the ripcord (which is Jake’s arm) and Jake then shape shifts into a parachute. Finn and Jake land safely on the ground. Finn greets Princess Bubblegum and the Candy People once they safely reach the ground. After Finn and Jake were dancing, Finn said that he would go get some food.

Jake meets a Bear and tries to introduce himself to him, who doesn’t understand Jake. The Bear then tries to eat some of Finn’s peanuts, but starts choking. Finn hits the Bear’s back with the Enchiridion and the Bear spits out the peanuts he was choking on. Everybody then continues dancing. After the party, when Finn and Jake are walking home in the dark, the Bear follows them. They go back to the Tree Fort.

Jake is listening to music when Finn shows that the Bear copies everything Finn does. When Jake tries to get the Bear to copy him, the Bear pushes Jake away. The Bear then repeats Finn by saying “Sweeping weak.” Finn suggests that the Bear spend the night in the Tree Fort in the bathtub. Jake wakes up in the middle of the night when he hears a noise. He sees the Bear dressed up as Finn and dancing. The Bear continues to repeat “Hey Princess Bubblegum! Hey everybody!” while snapping, just like Finn did in the beginning of the episode. When Jake tries to prove to Finn that the Bear was impersonating him, the Bear is sleeping. Finn says that he believes Jake but that the Bear isn’t hurting anybody, so it is fine. During the next morning, Finn, Jake, and the Bear are eating cereal at the table. Finn then says that he has to go pick up BMO from soccer and tells Jake not to eat the Finn Cakes (cupcakes that look like Finn). The Bear ended up eating all the Finn cakes and Jake records the whole thing. When Finn and BMO come back, Finn first gets angry at Jake for eating the Finn Cakes, but after Jake explains that the Bear ate them, Finn gets angry at Jake for just letting it happen. They both discover a note that says that there would be a party in the forest at night.

Finn and Jake then go into the forest and see the Bear, disguised as Finn, partying with PB and the Candy People. Finn tells Jake that PB and Finn never went steady when Jake tells Finn that the Bear is stealing his ex-girlfriend. Jake then convinces Finn that the Bear never really liked Finn, and that the Bear just used him. Finn rips the Bear’s mask off and tells him that the jig is up. The Bear runs away, crying. After Princess Bubblegum explains that nobody actually thought the Bear was Finn, Finn runs after the Bear and apologizes. He gives the Bear the Enchiridion and tells him that he can become a true hero. The Bear climbs up a mountain and goes into a cave. The Snail then asks if the Bear brought the book, and the Bear presents it to the Snail, who is still possessed by The Lich. 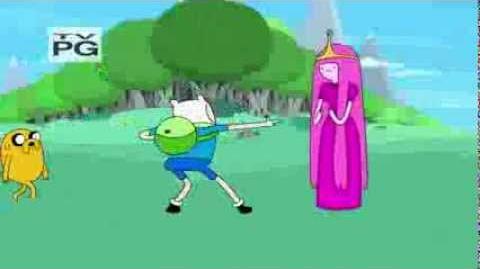 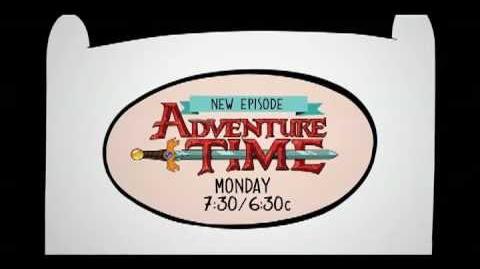 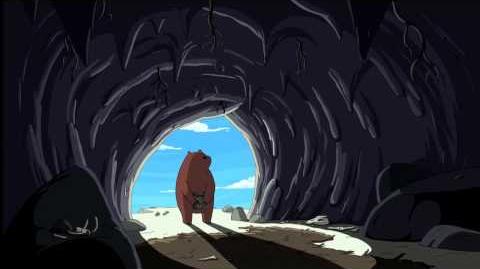 "Did you bring the book?"

"Yes! One step closer!"-Snail, possessed by The Lich 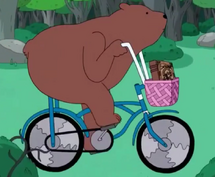 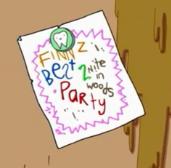 The Bear passing by a ruined building.

Buildings from an earlier scene.

PB and candy people.
Add a photo to this gallery

Retrieved from "https://adventuretime.fandom.com/wiki/In_Your_Footsteps?oldid=247088"
Community content is available under CC-BY-SA unless otherwise noted.