"Ignition Point" is the twenty-second episode in the fourth season of Adventure Time. It's the one hundredth episode overall.

Finn and Jake sneak into the Fire Kingdom to get Flame Princess' scented candles, and end up discovering a plot against the Flame King's life.

Finn looks over at Flame Princess, who seems distracted, and asks what is wrong with her. She responds that their "magic tricks" make her feel sad because she had left her scented candles at the Fire Palace. Jake says that she should go back to the Fire Kingdom to grab them, but Flame Princess is still mad at her father for locking her in the lantern for so long. Finn says that they could go get the candles, which Flame Princess agrees to, but tells them to avoid being seen her dad as she does not want her father thinking that she needs anything from him. Out of no where, Finn and Jake hear a farting noise and when they look behind them they notice a rock is moving with Flambo underneath it. They are both surprised and Jake whispers to Finn that he thought Flame Princess was the one who was farting. Finn asks Flambo to cast Flame Shield on them which he does.

As they enter the Fire Kingdom they go up into a window which leads to Flame Princess's bedroom and see and small stack of candles on a nightstand-like rock. Jake says they smell like an old lady's bathroom which Finn finds offensive, but Jake says they remind him of his grandmother who he loves. As they start collecting the candles they hear a voice outside the door which Finn listens too and looks under the crack of the door. Finn realizes the two people are plotting to kill Flame King, Flame Princess's dad, and he learns that one of them has a voice that hisses (evaluates the s in his talking) and the other has an untied shoelace. He learns that they plan on killing him with ice, which would be more painful than water.

As Finn and Jake walk out of the room, down a hallway, to find the two conspirators, three flame people come so they disguise themselves as a photo hanging on a wall. As the flame people play around with Finn in painting form, he starts to run out of oxygen and the three flame people run off to go to "snack time" which makes Finn happy. They hear one of the conspirators down the hall and follow it which leads them to an air vent which they climb into. With Jake's hearing they walk around in the air ducts and Jake falls down a hole which leads to another part of a duct. When Finn falls down, he lands on his face and asks Jake why he did not catch him and Jake responds to it with to tell him next time.

As they continue along they hear the hissing voice which they follow it into the kitchen where a chef is preparing food. They land in a vat of blueberries and they chef confuses them with blueberries due to the Flame Shield spell turning them blue. His hissing voice turns out to be a snake on Finn's shoulder and the chef says that he is going to chop them up because he still thinks they're blueberries. Finn and Jake run away where they meet a crowd of actors and pull two of the actors away with Finn whispering, "I'm sorry! I'm sorry!" They disguise themselves in the actor's costume and after learning they are in a play in front of the king and everyone in the Fire Kingdom they devise a plan in which they would pretend to be conspirators and Finn would have an untied shoelace and Jake would say -s whenever he spoke.

As the duo carries on throughout the play they notice a guy looking suspicious and continue to do it, but soon Flame King catches them and orders them to be executed. They learn the executors are the real conspirators and yells out, "Naked babies! Naked babies!" to get the crowd's attention which he then reveals the executors to be the conspirators. Flame King unmasks them to reveal Torcho and Furnius, his brother's children, whom he thought were extinguished. He orders them to the "punishment room." Finn and Jake learn that Flame King had killed his brother in order to take the throne. Finn then asks if Flame Princess is evil, to which Flame King replies yes. However, Finn then asks "if she hanged out with someone good then could she be good" and Flame King again replies yes. As Finn and Jake get out of the Fire Palace Flame King has a concerned look on his and says to himself, "Good?"

Finn and Jake arrive at Flame Princess's house, who is now asleep. Finn sighs adoringly and Jake lights up her candles using her hair. They then leave, but Flame King's face erupts from the candle's fire and whispers multiple time into Flame Princess's ear, "evil, evil, evil!" before disappearing due to Flame Princess waking up with a surprised and scared look on her face. 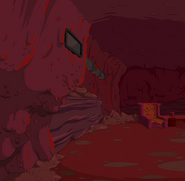